1984 was the final year that multi-cylinder, two-stroke, GP bikes competed in the Daytona 200. Kenny Roberts (2) won, but Freddie Spencer (19) took the checkers the following year, which was the first Daytona 200 of the Superbike era.

And so, next year’s Daytona 200 will be unlike any Daytona 200 that has ever come before it. Not only will it be run by MotoAmerica for the first time in its history, but the bikes competing in it will be different, as well.

That is notable, to be sure, but it is far from unprecedented.

In fact, the Daytona 200, which is the oldest AMA-sanctioned road racing event in the U.S., has undergone all sorts of changes in the past eight-and-a-half decades.

The very first Daytona 200, in 1937, would now be considered a Supermoto race in modern terms. Held on a section of Daytona Beach, as in the actual sandy beach itself, the 3.2-mile race course also incorporated a section of asphalt that was literally part of the public road that ran alongside the beach. The riders rocketed down the road, turned left, roosted in the opposite direction down the sand, turned left again, and went back down the road to complete a lap. And that was it, for 200 miles.

In 1961, the Daytona 200 switched from the beach/road oval to the new Daytona International Speedway, which had been built on the other side of town. At first, motorcycles only raced on the infield course. Safety concerns kept motorcycle racers from using the 31-degree banking at the Speedway for the first three years, so a race course was created using most of the track infield along with the tri-oval section where the finish line is located in front of the spectator grandstands. Then, in 1964, the banking was also incorporated into the race.

In the 1970s, the Daytona 200 grid included names like Nixon, Romero, and Emde aboard four-strokes and two-strokes alike.

An annual rite of Spring, the Daytona 200 always featured the fastest motorcycles that the manufacturers could build, the tuners could improve, and the riders could race. As such, the bikes evolved fairly quickly from big-displacement four-stroke twins to multi-cylinder two-stroke GP bikes. Riders like Giacomo Agostini, Steve Baker, Kenny Roberts, and Dale Singleton piloted these fire-breathing machines shod in skinny tires to speeds approaching 200 miles an hour.

Everything changed in 1985 when the Daytona 200 switched to Superbikes. These production-based, streetbike-derived motorcycles, by the way, had already been racing at the Speedway since the mid-1970s, but as a support class.

At the time, naysayers proclaimed that the Daytona 200 was ruined by the switch to the slower 750cc Superbikes, but by the turn of the century, the Superbikes were 1000cc, four-stroke “hyperbikes,” and virtually all of the OEMs were contesting the race again.

In 2005, the Speedway mandated that Superbikes be replaced by the so-called “mini-Superbikes” in the Formula Xtreme class. Again, many proclaimed that it was the end of the Daytona 200, but as had been the case so many times before, the demise of the “Great American Motorcycle Race” was greatly exaggerated.

In recent years, the Daytona 200 has stayed a 600cc-displacement race as it evolved from Formula Xtreme, to Daytona SportBike, to Supersport formats.

And now, as MotoAmerica returns the Daytona 200 to an AMA-sanctioned event, we will see riders competing on the high banks aboard motorcycles ranging from 599cc and 636cc four cylinders, to 765cc and 798cc triples, to 955cc V-twins.

It’s Supersport and Supersport Next Generation racing side by side in America’s original motorcycle road race that started them all. 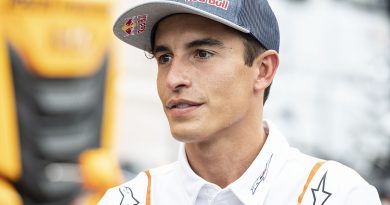 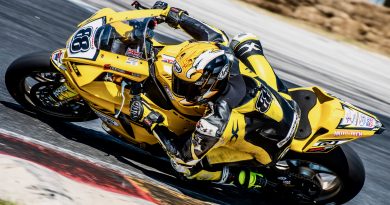 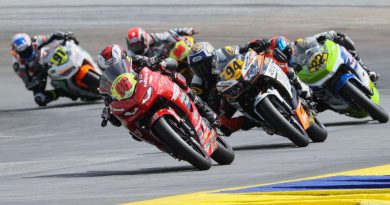