Josh Hayes won the 84th race of his career with a victory in the Supersport class at VIR on Saturday. Photo by Brian J. Nelson

Old age and treachery may not always beat youth and exuberance, but it certainly did on a scorching hot Saturday at VIRginia International Raceway when 47-year-old Josh Hayes beat 16-year-old Tyler Scott and 17-year-old Rocco Landers to win the Supersport race for the 84th win across all classes of the four-time AMA Superbike Champion’s stellar career.

It was the seventh Supersport victory of Hayes’ career and it puts him just two behind all-time win leader Miguel Duhamel and it took every bit of his experience to win the race. Will he do more races this season and take a shot at breaking Duhamel’s record? Who would be stupid enough to bet against it?

Yuasa Stock 1000 race one started the day at VIR, and on-track incidents led to the race being red-flagged and shortened in length. With a nine-lap sprint to the finish line, Disrupt Racing Suzuki rider Hayden Gillim showed his prowess and racecraft by taking the victory in dominant fashion. The Kentuckian crossed the finish line more than four seconds ahead of second-place finisher Geoff May, who was aboard his VisionWheel/DiscountTire/KWS Honda. Tytlers Cycle/RideHVMC Racing BMW’s Travis Wyman completed the podium in third.

“It was a good race,” Gillim said. “Like Geoff (May) said, everybody is going so fast. You have to be on top of your game every single weekend, every single session. Luckily, the Disrupt Racing guys are making me go really fast. They’ve given me a really good bike. Having the Stock 1000 bike and the Superbike to kind of compare data and notes from is helping a lot. We’ll just keep pushing. It’s going to be a long season. We’ve got 12 more races left, or something like that. It’s a lot of racing, a lot of laps, a lot of little mistakes that are going to be made. In the past, I’ve been one of those guys to make mistakes. I’ve just to keep those to a minimum and try to be here for the long haul.”

Supersport – How Sweet It Is

Supersport race one at VIR was also red-flagged and restarted with 18 laps instead of 19. The event was quite literally one for the ages, as 47-year-old road racing legend Josh Hayes showed that he’s still got something left in the tank. The four-time AMA Superbike Champion went up against riders who are a third of his age, and he battled throughout the 18-lap event to emerge as the winner by a little over .7 of a second. Racing for Squid Hunter Yamaha, Hayes held off the challenges of both 16-year-old Vision Wheel M4 ECSTAR Suzuki rider Tyler Scott, who finished second, and 17-year-old Landers Racing Yamaha rider Rocco Landers, who was third.

“I’ll tell you what,” Hayes said. “About five laps in, I thought, ‘Well, I’m getting fourth today. I’ve got nothing. I’ve got nothing anywhere on the track.’ Honestly, I felt like there was a point in the race where it kind of started to turn my way. I just focused on making one pass. I finally got some position on Rocco (Landers), which was really, really hard to do. When I got through, it seemed like Tyler (Scott) kind of came back to me not too crazy hard, and Josh (Herrin) was still right there, too. I can’t remember if that was before or after Sam (Lochoff) went off the track. When he came back on, it was a little scary. I kind of just missed him. That next lap, there were a few key pieces of racetrack where I was maintaining my speed and was able to bring him back to me a little bit. Then it was just a matter of positioning. I would put myself in a spot where I thought it was the right spot for a few laps, and then I’d make a mistake and couldn’t get there. But, eventually, I kind of was able to get to all the right places and then lead. It seemed like, when I led, we got into the 27s and I was just knocking out 27s, which I felt like were pretty hard to do. I felt like anybody that could make a move, there was a decent chance of mistakes, and I’d try to take advantage of those. I’m ecstatic. Squid Hunter did an incredible job. I was laughing on the podium. I said, ‘Hunting was good today.’ These guys are riding incredible and really, at the beginning of the race, it was almost like panic, like, ‘This is my station in life.’ Talking before the race, I said the second half of the race will be the key, and it came true. It’s going to take a while to wipe the smile off my face. 2017 here, and I did race a few other races, and I really wasn’t even that close. Part of it was back then and 2019 I couldn’t do race distance. I did a little bit of work, and in coaching Rocco, I got to spend quite a few laps riding at pace in-between Daytona and Atlanta, which kind of helped keep me sharp. I’m still, I think, getting better. I still think I can perform a little better tomorrow.”

As was the case with Yuasa Stock 1000 race one and Supersport race one, SportbikeTrackGear.com Junior Cup race one was also red-flagged and restarted, which created a five-lap dash to the checkered flag. Road Atlanta Junior Cup race winner Max Van won his second race in a row aboard his SportbikeTrackGear.com Kawasaki. His teammate Joseph LiMandri Jr. finished second and just a little over .010 of a second behind Van. Bad Boys Racing Kawasaki’s Avery Dreher earned his first Junior Cup podium and became the first rider to move up from MotoAmerica’s Mini Cup and finish on the podium in one of MotoAmerica’s “full-size” race classes.

“It’s been a great start to my season,” said Van. “But to be honest, this has been a dream. I’ve worked so hard for this. I lost 25 pounds over the off-season. Working nine hours a day, trying to graduate high school, working out for three hours a night is really paying off. I can’t wait for the rest of the season. I’m happy because yesterday in qualifying one, I said I was going to be on top of the box and guess where I am? And I did it today. So, definitely a lot of momentum going for the rest of the season and tomorrow. I can’t wait for it.”

The day concluded with Twins Cup race one, and as usual, MotoAmerica’s middleweight, twin-cylinder class did not disappoint. Polesitter Jody Barry won his second race in a row, but it was far from easy. The Veloce Racing Aprilia rider battled all the way to the finish line against a hard-charging James Rispoli aboard his Cycle Tech/Speed Weaponry/Mydigitalli Yamaha, and Barry beat Rispoli in a photo finish by just .020 of a second. Rispoli’s teammate Hayden Schultz finished a close third.

“Coming up to the last turn I was definitely all about it, because I knew I could get past him before the line,” Barry said. “Lappers were, like he (Rispoli) said, he was just stuffing them and they were getting in my way a little bit. We had to do what we had to do. Thankfully just put us in the right position. Coming up to the line, though, I was quivering in my boots a little bit. I was like, ‘Uh oh. Did I not play this right?’ The whole cooldown lap, I thought that he got it. I totally thought that. Amazing riding with these guys. All the passes were clean. The pace was fast. I am toasted. It’s definitely good racing out there.” 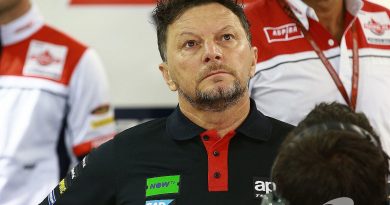 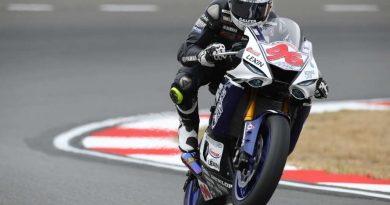 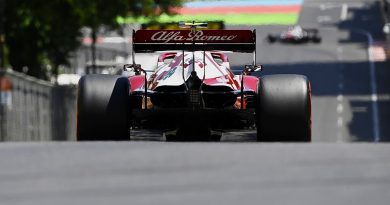