Jake Gagne leads his teammate Cameron Petersen, Danilo Petrucci, Mathew Scholtz and the rest of the Medallia Superbike pack on the opening lap of the race at NJMP. Photo by Brian J. Nelson

Fresh N’ Lean Progressive Yamaha Racing’s Jake Gagne took a big step towards a second MotoAmerica Medallia Superbike Championship on Saturday at New Jersey Motorsports Park with the defending champion stretching his advantage in the title chase from one point to 13 points.

Gagne won his 11th Medallia Superbike race of the year and the 28th of his career on a sunny afternoon in New Jersey. With his latest victory, Gagne moved into a tie on the all-time AMA Superbike win list with former AMA and World Superbike Champion Ben Spies. Not bad company, especially considering that Gagne didn’t win his first race until last year.

Gagne bested his teammate Cameron Petersen by 4.88 seconds with Mathew Scholtz coming out second best in his battle with countryman Petersen, the Westby Racing rider finishing less than half a second behind Petersen in third place.

The podium finish was Petersen’s 10th on the year with Scholtz landing on the podium for a ninth time in 2022.

Gagne’s championship rival Danilo Petrucci was fourth on the Warhorse HSBK Ducati NYC Panigale V4 R, with the Italian finishing off the podium for just the second time all season. Petrucci came into NJMP trailing Gagne by just a point, but his title chase took a hit with Saturday’s result, and he now trails by 13 with three races remaining.

Pole sitter PJ Jacobsen was fifth after losing out on his race-long battle with Petrucci, finishing just .051 of a second behind the Ducati at the finish line.

Jacobsen’s teammate Hector Barbera was sixth, some 10 seconds behind his teammate and just 1.2 seconds ahead of Disrupt Racing’s Hayden Gillim.

There were seven non-finishers, including Vision Wheel M4 Suzuki’s Richie Escalante with his GSXR-1000 suffering a mechanical failure.

“It was a great day. It’s been a good weekend. We learned a lot. Like Cam (Petersen) said, me and Cam were both doing some things with the bike yesterday we hadn’t tried all year. We learned some. We both went out this morning in Q2 really happy with the bike and happy with the progress that we made. I got a better start the second time around. I could see Cam looking over into turn one to see if I was coming and threw it up in there. If he didn’t give me extra room in the carousel in that first start and got it up in there, when you’re hanging off the right side, I almost don’t know where he is. Like he said, we’ve got a job to do. Hats off to both of these guys. It’s been a while, I feel like, since we’ve had a Yamaha one-two-three podium. That’s just great for the team. That’s obviously great for points. It’s great for Yamaha. It was a good day. We’ll see what happens tomorrow. Looks like we got some weird weather coming. We know how this place is in the wet, so it could get interesting tomorrow. Obviously, I know all those other guys are really strong in the wet, too. Danilo (Petrucci), PJ (Jacobsen), and Mat (Scholtz) and Cam (Petersen). So, it will be an interesting day tomorrow.”

“Yeah, it was a good race. Kind of like Matty (Scholtz) said. Leaving the track yesterday, I wasn’t in the best head space. We were a long way off. I just kind of was a little bit lost yesterday on the track, to be honest. Came in today and the team did an unbelievable job. It was a completely different motorcycle. Straightaway, from the first lap, I knew we had a bike that was going to be able to win races this weekend. But there’s only a few races left in the series and the championship is tight at the top. I’m here to help the team out. Obviously, I want to be winning races and all that, but there’s a bigger picture to all of this. Unfortunately, I’m just not in the best position to go chase for a championship. So, the best thing I can do is just help the team out and help my boy out and go get the championship for the team. So, I knew in the first start I think I was holding him up a little bit, and when he came past me around the carousel, I knew he had some pace. So then, in the second part (of the red-flagged race), I got a great start. I kind of looked back before we got on the brakes to see if he was close enough. So, I looked back and I saw he was right next to me, so I got on the brakes a little bit early and just let him go ride his race. Honestly, I’m really, really, really stoked with that ride. I’ve had some good rides this year, but with the way yesterday was going, I’m really damn stoked with that ride. I think that’s the closest I’ve stayed to Jake (Gagne) all year, pace-wise. Unfortunately, I ran out of steam a little bit towards the end there. Just trying everything. Like I said, I’m probably more stoked with that ride more than any other ride this year. That one meant a lot to me getting second. I think tomorrow is going to be sketchy conditions, so we’ll see how that goes. Congrats to all the boys up here. They deserve it.”

“I was following Cam (Petersen). I was more riding how you shouldn’t ride. I wanted to put the hammer down for three or four laps and see if I could pull a bit of a gap. Ended up losing the front in a couple corners. I think it was corner nine, I lost the front big-time. I thought I was going down. Ran out wide and Cam passed me. There was nothing I could do from there. Overall, I’m pretty happy with today’s race. We struggled and were pretty far back on Friday and we’ve just been slowly adding power and taking out traction control. I think we know that the softer tire starts to go with three or four laps to go. So, something to keep in mind for the second race tomorrow – if it’s dry.”

The post Gagne Takes Race One At NJMP And Extends Points Lead appeared first on MotoAmerica. 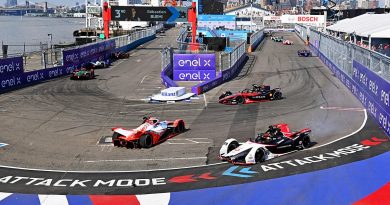 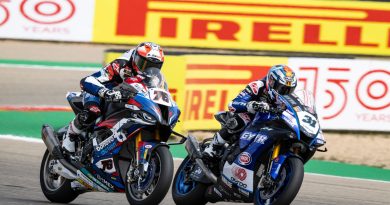 Gerloff Is Top Independent Rider In WorldSBK Race One At Aragón