Every motorcycle company has made a couple of bikes it wishes it hadn’t, like the Wankel-engined Suzuki RE5, 1974-1976, or Ducati’s GTL 350, a SOHC parallel twin, 1975-1977. And close to the top of Honda’s list might be the CB500T. Curious that the three just mentioned all appeared in the mid-1970s. With any new model, aesthetics play a part, as do performance and price.

Lots of money goes into any development, whether it’s for a new bike or upgrading an old model, and sales have to compensate. Most times it is not the engineers who make these decisions, but the suits, the people who are supposedly experts on what people want to buy. The CB500T was definitely an upgrade, so here is a little background: The CB450 model, along with its fraternal CL and CM versions, had been around for a decade, 10 years, which is a long time in the mind of Japanese motorcycle designers who are competing with other Japanese motorcycle designers. When the 450 first appeared in 1965, it was applauded for its originality, the vertical twin having the first double overhead camshaft engine in a street bike. Plus, an electric starter. And 444cc! This meant Honda was going to do battle with the British motorcycles American dealers had in their shops.

The Europeans had their own thoughts on the subject, but essentially they thought the Japanese would never really be able to compete with BSAs and BMWs. While the sole American company had just gone public in an effort to turn red ink into black, and would soon be bought by an outfit best known for its golf carts.

The Black Bomber, as that first CB450 was known, had problems and did not sell well. In 1968 a much revamped version showed up, with more traditional styling, plus a fifth gear. And a disc brake in 1970. Sales improved somewhat, and Honda felt this mid-sized machine was good for the brand, and had a price point for the casual rider. The more motivated rider would buy the new four-cylinder CB750.

In the early 1970s Honda engineers were very busy working on its Gold Wing, and somebody pointed out the elderliness of the CB450. It probably was the newest guy in the shop who was told to do something about it. And do it without spending too much money. OK, we’ll keep the DOHC and two-valves per cylinder design, but stroke it an additional seven millimeters and bring the cubic capacity up to 498cc and call it a CB500, with big numbers on the side covers. We’ll put a T after it, so people will know it’s a Twin, and not a four like the CB400F and CB550F.

Engine mods? Those extra millimeters in the stroke might cause problems to the crankshaft, so we’ll swap the 450’s roller bearings for big ball bearings, which should extend the life of the engine. We can use the 450’s DOHC head, but better cut the compression a little, from 9:1 to 8.5:1, so the owner can run the cheapest gas — which is getting expensive right about 1975. No need to change the 32mm Keihin CV carburetors. Rear-wheel power will be the same as on the 450, some 34 horses, but there will be a few extra pounds, like 15, on the 500. Wet weight, with 4.2 gallons of gas, was 460 pounds.

Unfortunately, their cost-cutting ways caused them to miss out on what should have been their primary concern — vibration! The 450 was known as a shaker, and the 500 was even worse. Rubber-mounted seat, rubber-mounted handlebars, thick rubbers on the pegs — and it still shook. In a seven-bike middleweight shoot-out, all Japanese, one moto-mag rated the CB500T worst in a number of categories, including vibration and overall. How expensive would it have been to put in a counterbalancer?

The chassis had a standard cradle frame holding the engine, a new fork up front, standard shocks at the back, 19-inch wheel at the front, 18-inch rear. Brakes were adequate, a disc up front, drum at the back. However, anybody who liked a good bit of lean angle was in for unpleasant surprises. On the left side the sidestand would start to scrape, soon followed by the centerstand, while on the right side the rear brake lever, which looped under the exhaust pipe, could pick up the rear wheel. Not fun. To compensate, sportier riders would crank up the spring preload on the shocks to give a bit more altitude, but then the ride could be unpleasantly stiff.

A curious addition was a rather bulky resonator/connector running between the two header pipes, in a successful effort to keep exhaust noise down. The photo bike has rather attractive aftermarket mufflers, which probably would not pass a contemporary sound test. The U.S. was becoming concerned over air pollution, so Honda added a couple of gizmos. One was the blow-by gas circulator in the cylinder head, and the other the air-cut valves in the carburetors, both of which were designed to prevent unburned gas from getting to the atmosphere. There is not enough room here to get into the specifics, just a reminder that green-suited ecology cops have been around for a long time.

With all these complaints, one nice aspect was the long and comfy seat…except for the passenger grab-strap. Easily removed, and many riders preferred to have their passengers pressed up against them with arms around their waists. 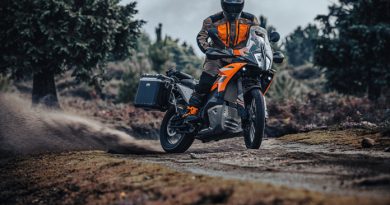 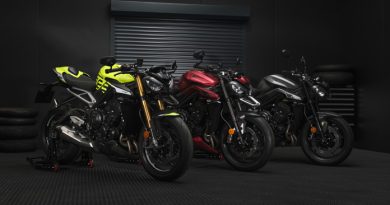 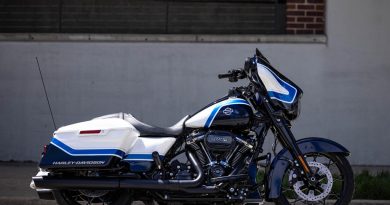