Danilo Petrucci (9) was the master of wet conditions at New Jersey Motorsports Park on Sunday as he splashed his way to victory. Photo by Brian J. Nelson

Warhorse HSBK Racing Ducati NYC’s Danilo Petrucci has been doing a rain dance all year, but it took until the ninth round of the 10-round 2022 MotoAmerica Medallia Superbike Championship for his wish to come true. But when it did, he took full advantage.

Petrucci raced away in the rain at New Jersey Motorsports Park to score his fifth race win of the season and perhaps his most important. The win, combined with championship leader Jake Gagne’s third-place finish, moved the Italian to within four points of Gagne in the championship with just one round and two races left to run at Barber Motorsports Park, September 23-25

Heavy rain fell prior to the start of the 14-lap race at NJMP, leaving no doubt that the field would be using rain tires. There was also little doubt that Petrucci would be fast in the conditions as he came to the MotoAmerica series with a reputation for being a rain master. And that he was. After slip sliding around for the duration and doing so more capably than the others, Petrucci crossed the line with 6.6 seconds in hand.

Second place went to Westby Racing’s Mathew Scholtz, the South African also impressive after charging through the field from behind after being relegated to the back of the grid after missing the sighting lap.

Gagne was a timid third, the defending MotoAmerica Medallia Superbike Champion in the unenviable position of having little to gain and plenty to lose in the tricky conditions. Gagne stayed out of trouble and gained a spot late in the race when his teammate Cameron Petersen crashed out of his battle for second with Scholtz. Gagne could also breathe a bit easier when Ashton Yates crashed the Aftercare Hayes Scheibe Racing BMW with two laps to go while hounding the Fresh N Lean Progressive Yamaha Racing rider.

Tytlers Cycle Racing’s Hector Barbera was fourth, some 25 seconds behind Gagne and four seconds ahead of Petersen with the South African remounting and riding his Yamaha to fifth without a left handlebar.

With two races remaining in the championship, Gagne leads Petrucci, 331-327. Petersen is third on 272 points, 17 points clear of Scholtz. Barbera strengthened his hold on fifth and now leads his teammate Jacobsen by 32 points.

“Yesterday maybe was the hardest race of the championship. Really, we struggled hard in this track. It’s so narrow, so bumpy, low level of grip. It’s the worst conditions for us. But I knew that this bike is working perfectly in the rain. I always like to ride under the rain. I just tried at the beginning of the race, I was not sure if the rain was coming or not, but it was so tricky to decide. I tried to make my pace, but without using too much rear tire. It was just enough because one lap more and we were in trouble. Not for winning the race, but for finish the race. I don’t know if it was shown on the camera, but I almost crashed three laps to go. I stayed in the track by I think one inch. I almost highsided. It was so tricky because at the end the rain was coming harder. Then whatever it will go, I’m so happy to bring the championship to the last race, even if I finish first or second because I’m so happy to bring all this excitement to this championship. I think it has been good whatever if I win or not to follow this championship and this fight to the end. I’m so happy to race here. For sure, today the rain was for us like water into the desert. I’m so happy. We go to Barber. I know the track. I had one day of test there in May. We will try.”

“We had a seven-minute practice session before the race. We went out on wets (rain tires), and it was way too dry, so we ended up putting slicks on thinking it would be fine. Then it started raining harder as the pit lane opened up. So, we went back to wets because we saw everybody else was using them. So, we kind of missed the pit lane out to go and line up. Then, unfortunately, I had to start in the back of the grid, a couple rows back. So, that really hurt me coming through the pack on the first couple laps. These guys just gapped me, but I kept my head down and charged hard and managed to get up to second place. I felt like I could have had the pace to be with Danilo (Petrucci) up front, maybe if I could kind of hang onto them the first couple laps. But overall, starting from the back of the grid, I’ll take second place.”

“It was tough. I just knew coming down to this thing I couldn’t throw it away. I wanted to be patient and take my time. I knew Danilo (Petrucci) would be fast. I knew Mat (Scholtz) would be fast. I knew Cam (Petersen) would be fast. So, it was tricky. This track is always really, really tricky in the wet. Every turn has a different feel, different amount of grip. Got off to a decent start and those guys kind of took off right away. I was kind of in that point where I’m like, ‘I just got to keep the thing up and not do anything stupid.’ Unfortunately, I saw Cam and Danilo was gone right away. He put the hammer down. Mat and Cam were battling hard ahead of me. Unfortunately, Cam fell down in that left-hander and then it got really tough at the end just to keep it upright once it kind of started raining again. But we’re up here on the podium. We brought it home on a tough day. We’re bringing this championship down close to the end. So, I’m excited about that.” 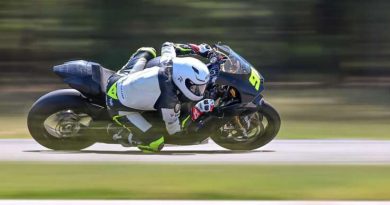 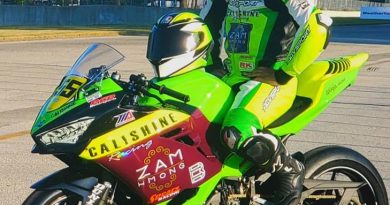 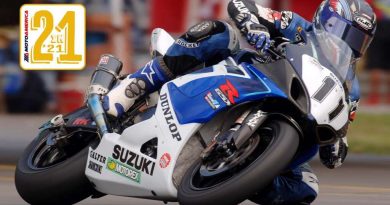