With two pole positions from two races in his pocket already in 2022, Jake Gagne went out and put his Fresh N Lean Progressive Yamaha on provisional pole on a smoking-hot day at VIRginia International Raceway on Friday.

Gagne lapped at a best of 1:24.371 in Q1 and that was just .031 of a second ahead of Westby Racing’s Mathew Scholtz, .105 faster than Warhorse HSBK Racing Ducati NYC’s Danilo Petrucci, .357 of a second ahead of Vision Wheel M4 ECSTAR Suzuki’s Jake Lewis and .584 of a second clear of his teammate Cameron Petersen as the top five were covered by a scant half a second.

But thus far, this year’s two races promise to be much closer than that. At least if Friday is any indication.

“I still expected that,” Gagne said of the top five being ultra-close on lap times. “Especially at this track. It’s tight, it’s technical, it’s kinda short, but it’s close out there. It’s going to be a brutal race. Twenty laps in the heat like that. We just have to focus and do our job. We’ve got another qualifier in the morning, so we’ll see what happens. Just try to put it up there on the grid and go race in the heat. This track gets to a point where it starts to be pretty greasy in the heat, tire temps, tire pressures go up. We’re gonna have to have a smart race and understand what these tires are gonna do in the afternoon tomorrow. We’ll go for it and have some fun.”

Class rookie Tyler Scott rode his Vison Wheel M4 ECSTAR Suzuki GSX-R750 to the fastest lap of the day in the Supersport class, his 1:27.898 besting his teammate Sam Lochoff by just .068 of a second. Landers Racing’s Rocco Landers ended up third with four-time AMA Superbike Champion Josh Hayes fourth on the Squid Hunter Yamaha YZF-R6. Warhorse HSBK Racing Ducati NYC’s Josh Herrin rounded out the top five in Q1 and was just .252 of a second off Scott’s best.

Bicknese Racing’s Hayden Bicknese put his Kawasaki Ninja 400 on provisional pole in the SportbikeTrackGear.com Junior Cup, besting SportbikeTrackGear.com’s championship points leader Max Van and his teammate Joseph LiMandri Jr. The top three were covered by just .082 of a second and the top seven were within a second of each other.

The first of two Stock 1000 qualifying sessions went the way of Tytlers Cycle/RideHVMC Racing’s Corey Alexander, the New Yorker lapping at a best of 1:26.289 to lead Cycle World/Octane/Chuckwalla Racing’s Michael Gilbert by just .102 of a second. Disrupt Racing’s Hayden Gillim filled the provisional front row, just .180 of a second ahead of VisionWheel/DiscountTire/KWS’s Geoff May.

The post Gagne Leads Day One At VIR, Half A Second Covers Top Five appeared first on MotoAmerica. 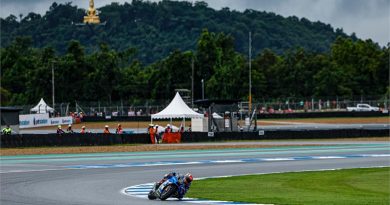 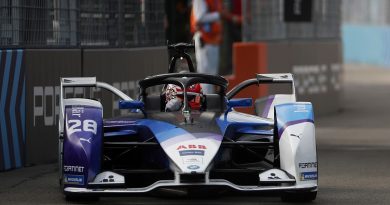 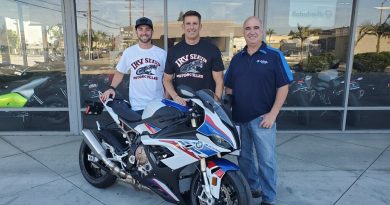