Fresh N Lean Progressive Yamaha Racing’s Jake Gagne had a perfect weekend in the Pacific Northwest, the defending MotoAmerica Medallia Superbike Champion breaking the lap record at Ridge Motorsports Park while qualifying on pole position, and then winning both Superbike races over the course of the Dynapac MotoAmerica Superbikes At The Ridge weekend.

If his rivals weren’t already worried, they should be now. Gagne looks to be on the verge of going on a roll like he did during his 17-victory, championship-winning season of 2021. Although a rough start to the 2022 season means Gagne only has six podium finishes in the 10 races held thus far, five of those podiums have been victories.

With five rounds (10 races) in the books, Gagne has now closed to within 11 points of championship leader Danilo Petrucci, the Warhorse HSBK Racing Ducati NYC Panigale V4 R-mounted Italian earning his second podium of the weekend on Sunday at Ridge with a second-place finish to Gagne.

In typical Gagne fashion, the Colorado resident stormed off to a flying start, put his head down for the first five laps to open a gap on his pursuers and then maintained that lead for the duration of the 16-lap race. At the finish line, Gagne was 4.578 seconds clear of Petrucci, who in turn was just a second ahead of Petersen. The win was the 22nd AMA Superbike victory of Gagne’s career, all of which have come in the MotoAmerica era.

Westby Racing’s Mathew Scholtz matched his fourth-place finish from Saturday with another fourth on Sunday, the South African losing his hold on second in the title chase to Gagne after holding it for the first nine races.

Fifth for the second day in a row was Tytlers Cycle Racing’s Hector Barbera, the Spaniard beating Vision Wheel M4 ECSTAR Suzuki’s Richie Escalante by just .171 of a second. Those two were well clear of Disrupt Racing’s Hayden Gillim who barely got the better of his Yuasa Stock 1000 Championship rival Corey Alexander and his Tytlers Cycle/RideHVMC Racing BMW M 1000 RR.

For the first time all year, Aftercare Hayes Scheibe Racing’s Ashton Yates failed to score a point with the Georgian crashing out of the race for his first DNF. Tytlers Cycle/RideHVMC Racing’s Travis Wyman was another who crashed out of the race.

Petrucci leads Gagne by 11, 176-165, after 10 races. Scholtz is third with 159 points, 20 better than Petersen. Barbera rounds out the top five in the MotoAmerica Medallia Superbike point standings with 101 points.

“It was a good weekend. I’ve always liked this track. It’s really technical, lots of ups and downs. We’ve had a lot of great weekends, but this is one of those tracks that really suits the Yamaha, for sure. After yesterday and all those red flags, it was kind of crazy, got off to a bunch of good starts. Today I knew these guys… everybody stepped it up and had a little more pace in them today than yesterday. So, I knew if I could lead into turn one, I had to push as hard as I could for four or five laps and see if I could have a gap or not. Luckily, I was able to have some clean laps and kind of get a gap. It was a fun race. Kind of flew by pretty quick. I knew those guys were probably battling hard back there. I’m happy to be back on track. I think the first couple races were tough on us. There were some things that we finally figured out with the front end of the motorcycle that I finally feel comfortable on now. So, just hats off to the crew because they just don’t stop working hard. We keep making progress. We know we’ve got to because these guys are making progress every weekend as well.”

“I can be happy, for sure. I hoped before the race to have a better start and stay with Jake (Gagne), but I had a quite good start, but Jake and Cameron (Petersen) were better than me. I tried my best. At the beginning I was not really good. Then I tried to manage all the chattering, all the issues with the bike. For sure, it’s been really, really tough weekend. It started quite good in FP1, but at the end of FP1, our problems began. We miss a lot of confidence because we have these kinds of issues with the electronics side that cover my feeling. We are investigating why. But it’s not an excuse. Jake today was unbelievably fast, another level. Big congrats to him and also to Cam. I passed him (Petersen) and I knew I wasn’t able to close the gap with Jake, so I tried to defend my position. Happy to go away with two podiums. Cannot wait to go to Laguna, even if my last time was 2013 with MotoGP. Like another era. Happy to be here.”

“It was a rough race, honestly. I could tell Jake (Gagne), even getting ready in the riders’ lounge and stuff, I knew he was going to drop the hammer and have something a little bit different for us today. So, I tried the first few laps, but, honestly, he was just on another level. It was a really tough race. Not making excuses or anything, but about six or seven laps into the race I developed a chatter that I haven’t had all weekend. So, tried to ride around that. I was just really struggling to get into corners and turn the bike through some of the longer stuff. But regardless, we’re walking away from the Ridge with two podiums, a second and third, so I’ll take it. Honestly, I believe it’s only up from here. Just doing good work with the team. I’m learning so much from Jake. I’m having so much fun. Looking forward to the rest of the season.” 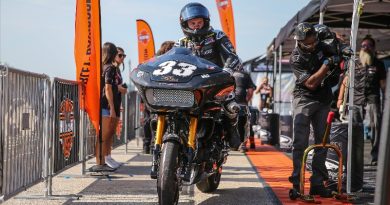 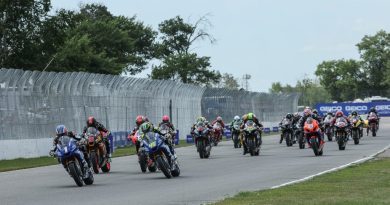 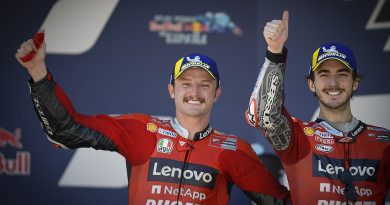