Miguel Duhamel won the 1991 Daytona 200 while racing as a fill-in rider for the injured Randy Renfrow.

With the news that MotoAmerica is headed to Daytona International Speedway in March of 2022 for the Daytona 200, we decided the perfect way to build excitement for the event would be to start digging through the history books and memory banks. Since Paul Carruthers is literally as old as the Speedway itself and covered almost 30 Daytona 200s as a journalist while working at Cycle News, it was a no-brainer that it would be him who would take on the task of trying to recall the good and the bad. And since we are the home of the AMA Superbike Series, we figured we’d have him start his look back with the 1985 Daytona 200 – the first of the 200s to feature Superbikes – and go from there. This week, we focus on the 1991, 1992 and 1993 Daytona 200s.

Miguel Duhamel didn’t even have plans to compete in the Daytona 200 in 1991 much less winning it. Drafted in as replacement for the injured Randy Renfrow, Duhamel made the most of the opportunity given to him by Commonwealth Honda team owner Martin Adams as he put the Camel-backed Honda out front for 32 of the 57 laps and stormed to a 10.290-second victory.

The Turning Point: Fast By Ferracci’s Doug Polen was the fastest of the fast all week at Daytona International Speedway, but the polesitter was out of the race on the opening lap of the 200 when his Ducati threw a chain. Polen earned pole position with his 1:53.638/112.779 mph lap on Wednesday of Bike Week and it was the first for Ducati at Daytona and the first pole position for a non-Japanese motorcycle since England’s Paul Smart put his Triumph on pole in 1971.

Six riders took a turn at leading the 200, helping make the 50th running of the race one of the most exciting in recent memory. In addition to Duhamel, James, Tom Kipp, Steven and Arnaiz all led at some point in the race.

Duhamel’s winning average speed was only 93.471 mph as some 13 laps were run behind a pace car and under caution flags.

Duhamel not only won the Daytona 200, but he also came out of the 600cc Supersport race with a victory. “It feels great to win Daytona,” the 23-year-old French Canadian said. “The names that come to your head are Freddie Spencer and Kevin (Schwantz) and those guys. I can’t believe I’m here. I can’t believe I won this race. This is the greatest feeling you can have.”

The man who would go on to be known simply as “Mr. Daytona” won his first Daytona 200 in 1992, the Georgian winning a near photo finish over Fast By Ferracci’s World Superbike Champion Doug Polen. Russell won the race with a record average speed of 110.669 mph to best Polen by just .182 of a second.

The Turning Point: As has been the case in a zillion races at Daytona International Speedway, the race came down to the final lap with Russell following Polen through the chicane and setting himself up for a slingshot pass just before the finish line.

With Polen finishing a close second to Russell, third place went to another Georgian – Mike Smith – in what was his debut race on the Camel-backed Commonwealth Honda RC30.

“I knew coming into this race that I could win if everything went well,” Russell said. “I’m glad we put on a show for the fans and for the finish to be that close. It was pretty exciting.”

Doug Polen smashed the track record at Daytona during Wednesday’s qualifying with the Texan lapping at 1:50.388 on the 3.56-mile road course. His lap was three seconds faster than his pole setting lap from the year before. His qualifying session was cut short when he crashed the Fast By Ferracci Ducati in turn one, escaping without injury.

Miguel Duhamel, the winner of the 1991 Daytona 200, was contesting the 500cc World Championship and didn’t compete at Daytona in 1992. Although Miguel Duhamel wasn’t racing at Daytona, his father Yvon certainly was. The elder Duhamel won the BMW-sponsored Battle of the Legends race, which was held in conjunction with the AHRMA Classics Day.

Eddie Lawson came of retirement to win the 1993 Daytona 200 on a Vance & Hines Yamaha.

Four-time 500cc World Champion Eddie Lawson came out of his brief retirement to win the 52nd running of the Daytona 200, the Californian besting 1992 Daytona 200 winner Scott Russell on the run to the flag by just .051 of a second on his Vance & Hines Yamaha FZR750RR OW-01.

The Turning Point: For the first time in Daytona 200 history, the leaders actually stopped for new tires on three occasions. As it turns out, the first four finishers all needed three sets of rear tires to go the distance at the pace they were running. When Lawson pitted for a third rear tire, it looked like the race would go to Russell as he led by 36 seconds on the 49th of 57 laps. But just when it appeared Lawson’s hopes were dashed, Russell was also forced to get a third rear tire.

Newsworthy: With Lawson barely beating Russell for the victory, third place went to Miguel Duhamel on the second Muzzy Kawasaki. Duhamel’s third place meant that all three of the riders in Victory Lane were former winners of the Daytona 200. Lawson previously won in 1986, Duhamel won in 1991 and Russell had tasted victory in 1992.

Lawson pleaded ignorance when asked what Dunlop rear tire had been fitted on their bikes in their final stops. “I don’t know,” Lawson deadpanned. “It had yellow letters on it, and it was black.”

The race was marred by the death of AMA road racing fixture Jimmy Adamo, who suffered his fatal crash on the sixth lap of the 200. The 36-year-old’s death was just the fourth motorcycle-racing-related fatality in Daytona International Speedway history.

Following his second-place finish in 200, Russell was slated to head to Europe to contest the 1993 World Superbike Championship.

Russell smashed Doug Polen’s one-year-old lap record at Daytona when he ripped off a 1:50.194 lap in Thursday’s qualifying session. Polen ended up qualifying second for the race while Lawson’s Yamaha blew an engine during qualifying, forcing him to start on the back row for his Twin 50 qualifier. 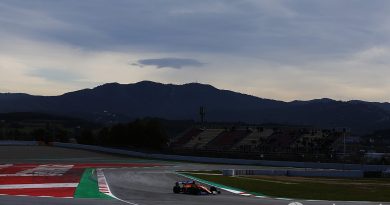 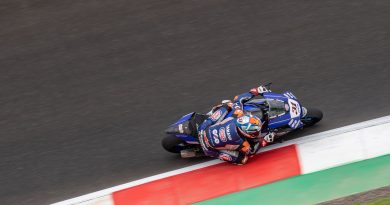 Gerloff Qualifies Fourth In Indonesia, Race 1 Postponed Due To Rain