At the Oct. 18 virtual press conference unveiling the new bikes, Triumph’s head of brand management, Miles Perkins, said the Street Triple, which was originally developed from the company’s race-winning Daytona 675, has had distinctive character ever since its introduction in 2007.

“From the start, the bike played a part in redefining what a middleweight sports bike should be about,” Perkins said. “Over the years, there have been a number of significant updates from Triumph, all of which have been about making the bike better, faster, more powerful, and lighter. And I think I wouldn’t be too demonstrative to say there are not many bikes in the world of motorcycling that have gotten better, lighter, more powerful – particularly names as well-regarded as the Street Triple.”

All three models in the new 2024 Street Triple 765 range will still feature a liquid-cooled 765cc inline-Triple, which was bumped up from 675cc with the 2017 Street Triple lineup, but Triumph says engine upgrades derived directly from the Moto2 race engine program have resulted in a significant step up in performance on the range.

Other lessons from the Moto2 race engine program that have been applied to the 2024 Street Triple range include a compression ratio that has been raised from 12.65:1 to 13.25:1 – an increase of 4.7%. Additionally, new pistons, con-rods and gudgeon pins are matched to new, optimized combustion chambers for an increased cylinder pressure limit and ultimately, more power, and the new valves and camshafts are said to give increased valve lift for improved intake, combustion, and exhaust efficiency. The gearbox has also been revised to include shorter gear ratios for faster acceleration.

In the media statement announcing the new Street Triple range, Triumph said that new technology and high-specification components, combined with an updated chassis, make the range “the best handling ever and the perfect performance naked bike set-up.”

At the press conference, Triumph’s global product marketing manager, James Wood, said the specifications of the chassis and suspension have “always been about agility, precision, and having a bike that you really connect with intuitively … and give the best possible ride for each of these three models, with the R being more road focused, the RS adding even more advanced performance and track-focused capability, and the Moto2 Edition, which has the most track-focused capability ever for a Street Triple.”

The 2024 Street Triple 765 R and RS both benefit from the new generation’s more focused and commanding riding position, the result of a new handlebar that is 0.47 inch wider. The race-inspired Moto2 Edition goes one step further with clip-on handlebars that are 3.15 inches lower and 1.97 inches farther forward than the R and RS. This change, combined with the bike’s unique high-specification Öhlins fork, is said to deliver even more race bike poise and front end feel. Both the RS and the Moto2 Edition also feature revised geometry with a steeper rake and a raised back end for nimble, faster turning.

As far as suspension, components from Showa and Öhlins are fully adjustable for preload, compression, and rebound.

The Street Triple R is shod with Continental ContiRoad tires, and the RS and Moto2 Edition get Pirelli Diablo Supercorsa SP V3 tires.

The company said this translates into tight corner exits and precise, predictable chassis behavior, and results in class-defining performance when combined with the bike’s lightweight chassis and incredible power-to-weight ratio.

The Street Triple R has a wet weight of 417 lb, with the RS and Moto2 Edition coming in at 414 lb. Wood said the power-to-weight ratio has “always been key.”

“The attributes that make this such a great, precise bike for the track also make it an easy and intuitive bike to ride on the road, for any rider and any skill level.”

The new Street Triple 765 range features the latest generation of optimized cornering ABS on all three new models. The system features a new ABS modulator with an integrated IMU for more refined ABS control. Tailored settings integrated into each of the riding modes alter the level of ABS intervention, while a track-focused tune is also present for riders seeking minimal ABS intervention.

Optimized cornering traction control supported by an IMU that continuously calculates the lean angle to ensure the optimum slip rate and torque control is also now standard on all three Street Triple 765 models. Four independently adjustable levels of intervention can be selected to suit riding styles and road conditions, including a track-focused tune with minimal intervention as well as the ability to turn it off altogether for experienced riders in high-grip racetrack situations.

The new Street Triple 765 R features four ride modes – Road, Rain, Sport and Rider-configurable – while the RS and Moto2 Edition have an additional Track mode designed to be as unintrusive as possible while still providing the reassurance that the electronic systems are there to help in unexpected situations.

The Road, Sport, and Track modes have new, more dynamic throttle maps that Triumph says provide an even more responsive feel. Rain mode restricts the engine power to 98.6 hp while increasing the level of ABS and traction control intervention for better feel and control in wet conditions.

The new Street Triple 756 RS and Moto2 Edition feature 5-inch full-color TFT instrumentation with ergonomically optimized switch cubes and a five-way joystick. The MyTriumph connectivity system is pre-enabled and provides turn-by-turn navigation, phone control, and music operation via the accessory-fit Bluetooth module and free My Triumph app. A lap timer is included on the RS and Moto2 Edition for track use.

The new 3.96-gal. fuel tank has integrated side panels with an angular design that aligns with the sharper radiator cowls, further complemented by a new headlight finisher that also incorporates the air intake. Additionally, there’s a new color-coded belly pan for the RS, which is available as an accessory option for the R.

The rear end of the new Street Triple has a sporty, upswept design lending to a focused, nose-down attitude. The RS features a color-coded seat cowl with an interchangeable passenger seat. The new silencer shape adds to the Street Triple’s aggressive stance.

The Moto2 Edition features lightweight carbon fiber bodywork, including the front fender, side panels, headlight finisher, and belly pan, and each of these limited-edition motorcycles has a machined top yoke with its number etched onto it. 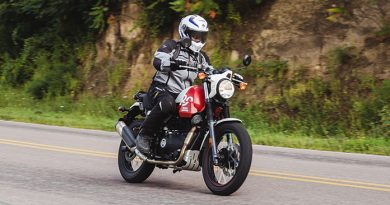 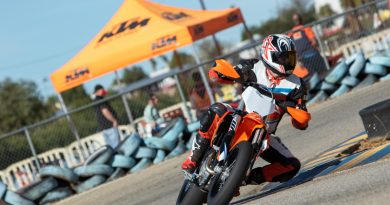