At a CFMOTO press launch in late June 2022, we got a few laps in with the Ibex 800 T (formerly the 800 ADVentura T). Information on the bike was embargoed until August, at which point we profiled the Ibex 800 T in our September issue and on the website. At that point, there was mention of an Ibex 800 S, but the bike wasn’t available at the Minnesota press launch. However, details have since been made available on the Street version of the bike.

As mentioned in the recap article of the numerous bikes we tried out at the launch, CFMOTO is perhaps most well-known for ATVs and side-by-sides, which it has been selling in the U.S. since 2002. It set up its American headquarters in Plymouth, Minnesota, in 2007. The company established a partnership with KTM in 2014 and soon after began producing KTM 200/390 Dukes for the Chinese market. After a brief stint importing motorcycles such as its 650NK naked bike and the 650TK sport-tourer to the U.S., CFMOTO pulled back from the market but returned recently with a full lineup for 2022.

As to the Ibex 800 T we tested, our reviewer said it felt “solid, responsive, and – not surprisingly given the origin of its engine – on par with similar offerings from Europe.”

Like its up-spec sibling, the Ibex 800 S is powered by a liquid-cooled, DOHC, 8-valve 799cc parallel-Twin borrowed from the previous-generation KTM 790 Adventure making a claimed 94 hp and 57 lb-ft of torque and mated to a 6-speed gearbox and slip-assist clutch. The Ibex 800 is equipped with throttle-by-wire and has two ride modes (Sport and Rain) and cruise control.

The Ibex 800 has a chromoly-steel frame, fully adjustable KYB suspension (front/rear travel is 6.3/5.9 inches), 19-inch front and 17-inch rear aluminum alloy wheels, and J. Juan triple-disc brakes (320mm dual discs up front, 260mm single disc in the rear) with cornering ABS. It has full LED lighting, an adjustable windscreen, and a 7-inch TFT display. With a 5-gallon fuel tank, it comes in at curb weight of 509 lb.

Besides the extra bells and whistles on the Ibex 800 T (heated grips, a heated seat, quickshifter, and a USB and 12V port), the main difference in the Ibex 800 S is the aluminum alloy wheels, which are spoked on the 800 T. 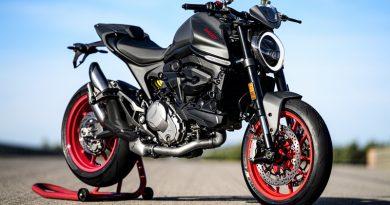 Store your gun in motorcycle vault!