When Ducati launched the Multistrada V4 range in 2021, features like adaptive cruise control (ACC) and 36,000-mile valve check intervals made the platform more touring-ready than ever. For 2022, the Multistrada V4 Pikes Peak takes the model back to its sporting roots with performance upgrades and styling to match.

The brand’s 1,158cc Grandturismo V4 returns with 170 horsepower and 92 lb-ft of torque, but Ducati’s Race Riding Mode now maximizes the mill’s potential. Of course, the Multistrada V4’s Sport, Touring, Urban, and Enduro ride modes remain, but the new option gives the Pikes Peak a personality all its own. In Race mode, the system’s rev limiter kicks in more gradually, optimizing drive during high-rpm operation. A revised quickshifter speeds up those gear changes, both up and down.

Ducati complements the model’s racing spirit with a more aggressive rake angle with its new 17-inch front wheel, sharpening to 25.75 degrees for improved agility. Ducati’s signature single-sided swingarm reappears on the V4 Pikes Peak, calling back to Multis of the past and extending the wheelbase to 62.8 inches for more stability.

The Pikes Peak adopts Öhlins Smart EC 2.0 suspension with event-based settings that adapt to the user’s riding style. Along with the semi-active suspension, the Multistrada touts superbike-worthy brakes, with twin Brembo Stylema calipers mated to 330mm discs up front and a single-piston caliper biting a 265mm rotor out back.

With the Pikes Peak International Hill Climb no longer featuring motorcycles, Ducati turns to its MotoGP outfit for styling inspiration. Resplendent in Ducati red with number plates at both sides of the tank, the Desmosedici GP21-inspired livery immediately fits in at the circuit. A carbon fiber beak and front mudguard add style while reducing weight, and the smoke-gray plexiglass windscreen streamlines the Pikes Peak’s silhouette. A carbon fiber-capped Akrapovič silencer and a two-tone black/red rear saddle complete the Multistrada’s transformation. 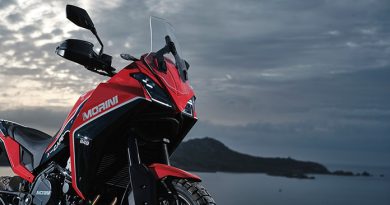 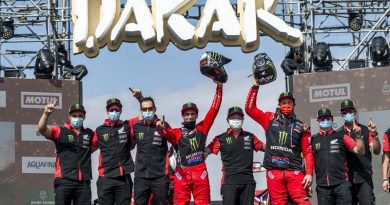 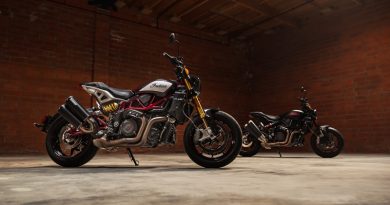