Though its bodywork is camouflaged, there’s much we can learn from these photos of the final prototype of the new Triumph Tiger Sport 660.

Last October, Triumph unveiled the Trident 660, a middleweight naked bike designed to compete with stalwarts in the class like the Honda CB650R, Suzuki SV650, Yamaha MT-07, and Kawasaki Z650. But about a month before the official unveiling, Triumph released photos of the final prototype of the Trident 660 during testing near the company’s headquarters in Hinckley, England.

Triumph has now done the same with the first spin-off of its 660 platform, “the new Tiger Sport 660 that is set to bring triple engine performance advantages to the middleweight adventure sports category.” In the photos, the bike’s bodywork is camouflaged with black-and-white Triumph stickers that hide its exact lines, but there’s still plenty to draw from.

With its fairing and windscreen, the new 2022 Triumph Tiger Sport 660 will be ready for sport-touring.

The Trident 660 is powered by a liquid-cooled, DOHC, 660cc inline Triple that makes 80 horsepower at 10,250 rpm and 47 lb-ft of torque at 6,250 rpm (claimed), with 90% of peak torque on tap as low as 3,600 rpm. The engine in the Tiger Sport 660 looks exactly the same, down to the stubby exhaust exiting below the cast aluminum swingarm on the right side. Both share a tubular-steel frame.

The engine is derived from the 2013-2016 Triumph Street Triple 675, with a narrower 74mm bore and longer 51.1mm stroke yielding the lower displacement. It incorporates 67 new components, including a new crankshaft, piston design, and cam profiles.

If its inline Triple is unchanged from the Trident 660, then the Tiger Sport 660 will make 80 horsepower and 47 lb-ft of torque.

We can see that the Tiger Sport 660 has the same five-spoke, 17-inch cast aluminum wheels, Michelin Road 5 tires, Nissin triple-disc brakes with ABS, and Showa inverted fork as the Trident. On the Trident 660 the fork is non-adjustable, the Showa rear shock only offers preload adjustability, front/rear travel is 4.7/5.3 inches, and seat height is 31.7 inches. The Tiger Sport 660 doesn’t look appreciably taller, though it does have a different tailsection with integrated saddlebag mounts and a more deeply dished seat.

The most obvious difference between the Trident 660 and the Tiger Sport 660 is the latter’s front fairing and windscreen. The added wind protection, along with a possibly taller handlebar and optional hard luggage, will make the middleweight Tiger ready for sport-touring. Wet weight of the Trident is 417 pounds, and the Tiger’s fairing and windscreen are likely to add 20 pounds or so. Fuel capacity on the Trident 660 is 3.7 pounds; for sport-touring duty we expect to see a larger tank on the Tiger Sport, perhaps 4.5 gallons.

Priced at $8,195, the Triumph Trident 660 is within a few hundred dollars of its Japanese competitors and offers additional features like selectable ride modes, switchable traction control, and a TFT color display.

To cover the cost of the extra bodywork, the 2022 Triumph Tiger Sport 660 is likely to be priced around $8,500-$9,000. That’s on par with what would likely be its closest competitor, the Suzuki V-Strom 650, which has a base price of $8,849 and is equipped with standard ABS and traction control (neither are switchable) but not a TFT display. With its 19-inch front wheel, the V-Strom 650 offers more off-road capability than the Tiger Sport 660. Both can be outfitted with factory accessory saddlebags.

Interestingly, 660 is same displacement used on the Aprilia RS 660, Tuono 660, and soon-to-be-released Tuareg 660., though they have parallel-Twins and the Trident and Tiger Sport have inline Triples. Aprilia took a more high-performance approach, squeezing 100 horsepower out of its engine and equipping the RS and Tuono with higher-spec components and electronics. As a result, they are priced higher – the RS 660 starts at $11,299 and the Tuono 660 starts at $10,499. With its off-road-ready spoked wheels with a 21-inch front and nearly 10 inches of suspension travel, the Tuareg 660 will compete head-to-head with the Yamaha Ténéré 700 ($9,999).

So, about a month from now we should get full technical details about the new-for-2022 Triumph Tiger Sport 660. Stay tuned! 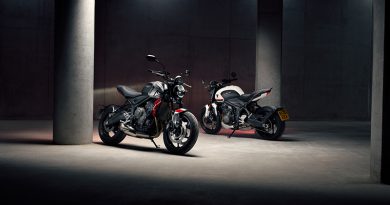 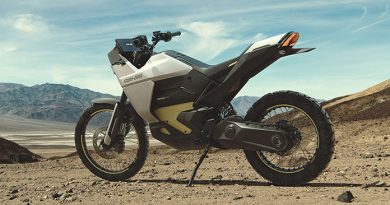 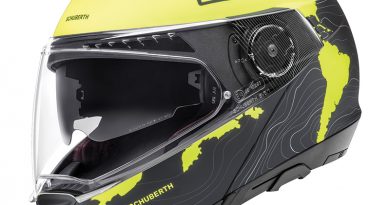