A couple of years ago, five-time MotoAmerica Superbike Champion Cameron Beaubier was pushing all the buttons. But, now that he’s racing in the Moto2 World Championship, those bikes have very few buttons to push. Photo by Brian J. Nelson.

Yesterday, someone really pushed my buttons. You know how it goes. But, instead of getting angry about it, I thought about “buttons” and laughed. Then, I decided to write a story about it.

If you’ve spent any time at all around a MotoAmerica Medallia Superbike–and, if you haven’t, we encourage you to do so because we have a very inviting paddock, and the riders and teams will let you see their bikes up-close and personal–you’ve probably noticed that there are a lot of buttons on them. Buttons on the left handlebar, buttons on the right handlebar, buttons on the dash, even buttons in places you wouldn’t think buttons would be. Secret places where only certain teams and certain people on those certain teams know where they are and what happens when you press them.

Some buttons are boring-looking. Gray-colored and dull. Others are colorful and shiny. They look like various and sundry M&Ms or, if you’re not into the whole candy-coated chocolate thing, then Skittles, bite-size candies. A rainbow of color.

The riders don’t eat them, though, and neither do the crew members. They do sometimes press them. Just a persuasive thumb or finger is all it takes. And glorious things happen.

Through the magic of modern electronics, pressing these buttons causes all kinds of things to happen, or as it were, not to happen. Here are a few of the functions controlled by buttons on a MotoAmerica Medallia Superbike:

• Launch Control: helps the rider get a better jump off the starting line without wheelying, spinning the rear tire, or burning up the clutch

• Lift Control: helps control the front end of the bike from lifting or “wheelying” too much on acceleration

• Engine Braking: helps control how much (or how little) of the engine’s compression is used to slow the motorcycle down when the throttle is closed

• Pit Lane Speed Limiter: controls the top speed of the motorcycle in order to help the rider avoid exceeding the speed limit on pit lane

• Engine/Fuel Mapping: enables the rider to choose between a specific number of different ignition “maps” that affect engine performance

And that’s only a few buttons. Some motorcycles, depending on the team and the rider(s), have more buttons than that, or less. And, the buttons aren’t always in the same position from bike to bike, either. So a rider has to learn the function and position of each button. That’s not usually a problem if the same rider is racing the same bike at each round. But, take someone like Kyle Wyman, who was recruited to fill in for PJ Jacobsen at Road Atlanta when Jacobsen tested positive for COVID. Wyman had never ridden the Tytlers Cycle Racing BMW M 1000 RR Superbike before that weekend so, on top of just getting used to riding the motorcycle itself, he also had to quickly learn the functions of the buttons on the handlebars. Obviously, Wyman is a quick study since he podiumed on the bike that same weekend.

I know what you’re thinking. “I play video games. How hard can it be to press a bunch of buttons? I do it all the time when I play (insert name of the favorite video game here).” Ah, but try playing video games while seated atop a 200-horsepower motorcycle going 190 miles per hour while you’re also twisting the throttle, squeezing the front brake, applying the rear brake with your foot (or thumb), and shifting gears with your left foot. Oh, and also while you’re leaned over in a corner with your knee, elbow, and possibly even your shoulder sliding on the asphalt. With other riders all around you. Trying to pass you. Now, try pressing some buttons. But don’t press the panic button.

Thankfully, there isn’t a panic button on a MotoAmerica Medallia Superbike. The panic button is in your head. 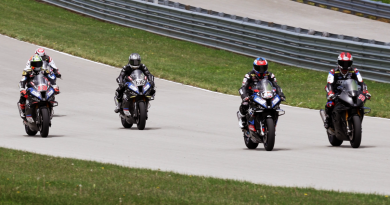