As the first of two Supersport races was reaching its crescendo, the math was being done. If Sean Dylan Kelly beat Richie Escalante, his championship points lead would grow to 22 points. If Escalante won the race that was going back and forth between the two with more passes than you could keep track of, Kelly’s lead would be cut to 12 points.

And then, all of a sudden, it didn’t matter as both Kelly and Escalante were in the kitty litter on the outside of turn five on the last lap after what could only be defined as synchronized crashing. And Stefano Mesa was in the catbird seat, watched the debacle take place and cruised to his first win in the class.

Supersport: Mesa Gets His First!

Saturday’s Supersport race one at Road America was looking like it would be another photo finish between polesitter Kelly and defending class champion Escalante. The pair battled hard for the win and exchanged the lead more than 30 times during the 11-lap race. On the final lap, both riders almost simultaneously lowsided and slid off the track unhurt. While they scrambled to remount, finish the race, and salvage points, MESA37 Racing Kawasaki rider Mesa took the checkers for his first career MotoAmerica Supersport victory and second win aboard a 600-class motorcycle at Road America.

“It was a great race,” Mesa said. “The whole MESA37 Racing team has been working so hard these past couple of years, trying to get the big ball rolling, trying to compete with the factory teams. We’ve been doing a good job. To be honest, it was a great race. It’s not how I wanted to win it, but I’ll take it, definitely. It was really just a tough race. We’ve been struggling a little bit finding that sweet spot on the Kawasaki. Going into the race, we did a gearing change and a few (other) changes, so it was kind of a blind eye, but I think it worked. We’re definitely going to have to work a little bit harder to try and catch the two other guys. The two other guys definitely took off from us. I think we’re happy, but we definitely want to work harder, and we want to beat them. We want to beat them the right way. So, we’ll keep working at it.”

Scott Powersports KTM rider Tyler Scott took off from the start line of Saturday’s SportbikeTrackGear.com Junior Cup race like he was shot from a cannon. Polesitter Benjamin Gloddy had his work cut out for him, but he rode his Landers Racing Kawasaki hard and managed to catch back up to Scott. The pair swapped the lead several times during the seven-lap race, but in the end, it was Scott who prevailed with the victory. Meanwhile, Kermoto/Madden Painting Kawasaki’s Cody Wyman, who had started from the middle of the third row in eighth, made good use of the draft, and worked himself up to the front of the pack. On the final run to the checkers, Wyman barely nipped Gloddy at the line to take second place by .009 of a second. Gloddy settled for third and the final spot on the podium.

When asked if he thought taking the early lead in the race would enable him to get away and take an easy win, Scott said, “I was hoping that. I thought they were way closer than they actually were going to the line. I thought I was going to get passed at the line. I tried to pace myself throughout the race and just tried to stay up front for an opportunity to draft at the line. Then I saw the opportunity to lead the race, so I led the race the final lap and got the win.”

Twins Cup was the final race of the day on Saturday at Road America, and Robem Engineering Aprilia rider Kaleb De Keyrel made a strong statement when he started from the pole, got the holeshot, and won the eight-lap race by just under eight seconds. While De Keyrel cleared off at the front, the battle was on for the other two spots on the podium. Championship leader Teagg Hobbs crashed out of a possible podium finish, which handed the points lead to De Keyrel. Second place ultimately went to Jackson Blackmon Racing Yamaha’s Jackson Blackmon over third-place finisher Chris Parrish aboard his GCP Suzuki.

The win seemed easy for De Keyrel, but he didn’t think so.

“I don’t know if it was easy,” he said. “I just knew these guys were fast, and I knew that they were coming. My game plan was to try and get the best start I can and break the draft. Obviously, drafting is a huge part of racing here at Road America. I knew that our bike was a little bit slower on the straight. It doesn’t quite have the drive to get onto the straightaway, so I knew I had to try and break away and get out. Just kind of put my head down and went as fast as I could. I’ve got to thank my suspension guy. He’s been getting me more and more comfortable every time we hit the track. Obviously, we didn’t get a whole lot of testing at the beginning of the season, so just time on the bike is huge for us to get me more comfortable as a rider on the bike. We’re sitting in a pretty good spot right now. I’m feeling really confident, really comfortable on this Aprilia RS 660. It was just handling like a dream. I was just kind of putting my head down and going as fast as I could.”

In round one of the Mini Cup by Motul, MotoAmerica’s youngest racers, aboard Ohvale GP-0 mini-bikes, put on quite a show for the huge crowd in attendance at Road America’s kart track.

The results from 110 class race two were identical with Matsudaira getting another win, Gouker finishing second again, and Lupo Jr. again rounding out the podium. Matsudaira’s gap in race two was a little over 11 seconds.

Matsudaira was absolutely the rider of the meet because he was also the winner in both race one and race two of the 160 class. Atlas Speed Factory’s Jesse James Shedden finished second in both 160 races, and Matsudaira’s teammate Joshua Raymond rounded out the podium in both 160 races. 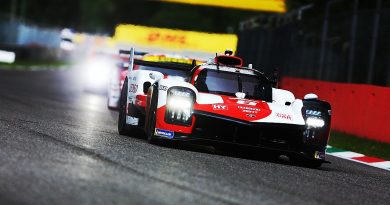 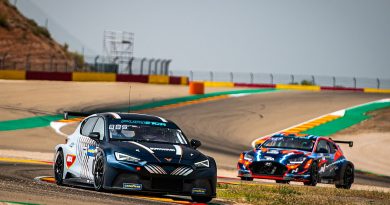 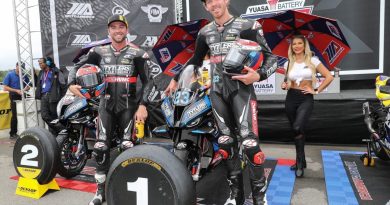