We sent our intrepid photographer Brian J. Nelson to the Velocity Invitational to capture the color, excitement, and pageantry of the event, and here’s a sample of what BJN saw and photographed:

The starting grid for MotoAmerica’s demonstration laps with three Superbikes, a streetbike, three King Of The Baggers bikes, and a Hooligan bike all lined up and ready to launch.

A Ferrari 250 GTO. By the way, the GTO stands for “Gran Turismo Omologato” or “Grand Touring Homologated.”

A classic Mercedes-Benz 300 SLR gets a little sideways through the Corkscrew.

The Team Camoradi Maserati Tipo 61 “Birdcage.” This bird has flown.

The Dan Gurney All American Racer Toyota MKIII as raced in IMSA GT by Juan Manuel Fangio II and PJ Jones. That ain’t no Prius.

Ford CEO Jim Farley gets a few pointers from Harley-Davidson factory rider Travis Wyman on how to muscle a King Of The Baggers race bike. Lean her over, Jim.

The Vodaphone McLaren MP4-27 Formula One race car. It takes a team of 10 technicians just to start the machine, and when it goes, it really goes.

Talk about iconic. Is there anything more so than a Porsche 917 in blue-and-orange Gulf livery? No, there is not.

Niki Lauda’s Ferrari 312 T2 Formula One machine. Can you say “Rush”? We knew that you could. 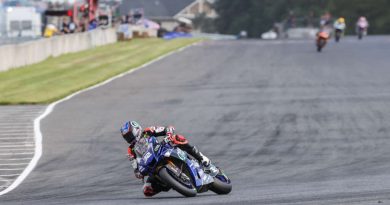 Gagne Has One Hand On The 2021 MotoAmerica Superbike Title 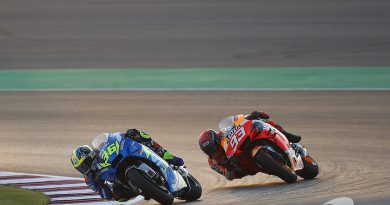 How MotoGP’s COVID protocols will work in Qatar 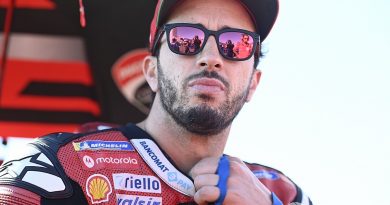