Based on his career trajectory to this point, most would have thought that Rocco Landers’ first Supersport victory would have come sooner than midway through his second season in the class. After all, the youngster from Oregon blazed through both the Junior Cup and Twins Cup classes, amassing 29 Junior Cup wins and nine Twins Cup victories en route to three class championships (two in Junior Cup, one in Twins Cup).

On Saturday, Landers got the monkey off his back with a Supersport victory, and he did so in dominating fashion, handily beating championship leader Josh Herrin and veteran Josh Hayes.

Supersport – Landers Gets It Done

Rocco Landers is used to winning. Despite only being 17 years old, he’s already won 39 MotoAmerica races in his young career. He’s also conquered two race classes by winning championships. The Supersport class has been a tougher nut for him to crack, however. Halfway through his sophomore season in Supersport, Landers got his first pole position in MotoAmerica’s middleweight class. And now, two rounds later, he notched his first win in Saturday’s Supersport race one at Brainerd International Raceway.

And he won with authority. Starting from the pole (his second one of the year), Landers led all but one of the 16 laps aboard his Landers Racing Yamaha and took the checkered flag by more than four and a half seconds over runner-up Josh Herrin aboard his Warhorse HSBK Racing Ducati NYC machine. Third place went to N2 Racing/BobbleHeadMoto Yamaha rider Josh Herrin, who filled in for Kevin Olmedo, who is recovering from illness.

“It feels amazing to win this race, finally,” Landers said. “It’s been so long. It feels great to finally get to a track where we can carry more momentum. I feel like I used the handling of my Yamaha R6 through these fast, flowy corners, and used the hard braking, as well. Can’t thank this guy enough. I’m so lucky to have someone like Josh Hayes in my corner. It’s unreal. My whole team, they worked so hard last night to make my bike as perfect as possible. We made a couple changes in-between qualifying two where we were able to throw down pole and for the race, and the bike felt a lot better. I was just able to put those laps in a row after I was able to take the lead. I couldn’t feel better in these circumstances. It’s a great feeling to be able to run the 124 on my helmet and to honor Scott (Briody) like this. I also can’t thank Yamaha enough. They’ve stuck with me through the hard times when I was outside the top five, struggling to get in the top ten in qualifying. Busted my butt. I was able to drop a lot of weight. I feel really good on the bike. I’ve never felt better. The bike has never felt better. I think we have a very good chance of pulling something off like this tomorrow, as well. That would be unbelievable.”

“Running with the pack” is a continuing theme for the riders in the SportbikeTrackGear.com Junior Cup Championship. In virtually every race, the key is to be in the group of riders at the front, and then make your move for the lead in the closing laps.

Such was the case for Altus Motorsports Kawasaki rider Kayla Yaakov in Junior Cup race one. She battled hard with a group of five riders at the front, and on the final lap, the 15-year-old put her head down, took the lead, and created a gap to ensure her second victory of the season. Yaakov bested SportbikeTrackGear.com Kawasaki rider Joseph LiMandri Jr. by just over one second, who, in turn, beat third-place finisher and Alpha Omega Kawasaki rider Cody Wyman by almost the same margin of just over one second.

“I think this was the best race I’ve ever ridden,” Yaakov said. “The bike wasn’t exactly where I wanted it to be, so I worked with what I had. It worked out in my favor. I had a plan going into the race, and just kind of worked on it throughout it. Everything went well. I dropped back a little bit, but I didn’t get too frantic. Just kind of sat there. I’m happy where I ended up. I think it was pretty nice to get out there and show what I’m capable of in a big group like that.”

In the only REV’IT! Twins Cup race scheduled for the weekend, MP13 Racing Yamaha’s Cory Ventura won his second race in a row after getting his season off to a bit of a slow start earlier in the year. Ventura survived a late-race skirmish with the other two riders who finished on the podium. Second place went to N2 Racing/BobbleHeadMoto rider Blake Davis, who was runner-up for the second race in a row after winning the first race of the season at Daytona. Finishing third was Rodio Racing/Warhorse HSBK Racing Aprilia rider Anthony Mazziotto.

“Big setback was me getting hurt after Daytona,” Ventura said. “We’ve been going to work. (Team owner) Melissa (Paris) and I both came into this year like, ‘it’s Twins Cup.’ I came on the bike last year and did pretty good. It should be a pretty simple year. But come to the fact part of it, these guys are gnarly. For sure, if they were racing 600s, they’d be battling for top fives, too. These guys you cannot take for granted. Probably some of my hardest racing I’ve ever done in my life has been here. So, we’re going to keep moving one step forward at a time and take the fight to them.”

Royal Enfield Build. Train. Race – Buyck In A Close One

Day one of MotoAmerica Superbikes at Minnesota event concluded with the women of the Royal Enfield Build. Train. Race. program competing in their feature race. Kayleigh Buyck emerged as the winner for the third race in a row but keeping her undefeated streak alive wasn’t easy. Chloe Petersen hung with Buyck for the majority of the race until Buyck managed to pull a small gap on the final lap to take the checkered flag by just over a second. With Petersen finishing as runner-up, third place went to Jennifer Chancellor.

“I knew I was going to be in a battle,” commented Buyck. “And I was excited for it. (Chloe) showed me a front tire, and I said, ‘Not today.’ The whole time, she was giving me pressure. She’s going to get me, and I’m stoked for that to happen. She’s a phenomenal rider. It was a battle the entire time.” 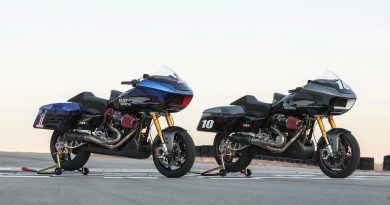 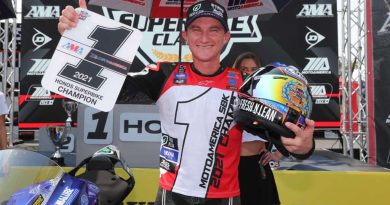 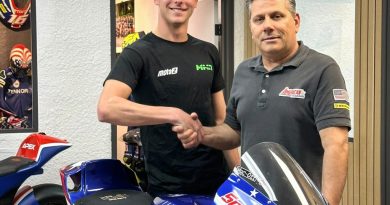