In addition to previous announcements from Honda about new and returning models for 2023, including the all-new 2023 Rebel 1100T DCT “bagger” model, the company recently confirmed the return of eight motorcycle models across the sport, standard, adventure, dual-sport, and cruiser categories.

The eight returning models include the CBR650R and CBR500R sportbikes; the CB1000R, CB650R, and CB500F naked bikes; the CB500X adventure bike; the XR650L dual-sport; and the Fury cruiser. Honda says that taken as a whole, the group highlights the diversity of the company’s motorcycle offerings.

The bike has a 6-speed gearbox, slip/assist clutch, and Honda Selectable Torque Control (HSTC) that can be turned off should the rider choose. It features a 31.9-inch seat height and adjustable Showa suspension. Four-piston radial-mount front brake calipers work on 310mm floating discs and are paired with a single-piston rear caliper and 240mm discs. Two-channel ABS is standard. It has a 4.1-gal fuel tank and 456-lb curb weight.

Like it’s CBR650R stablemate, the CB650R has a 649cc DOHC 16-valve inline-Four mated to a 6-speed gearbox, slip/assist clutch, and Honda Selectable Torque Control (HSTC), as well as the same adjustable Showa suspension and stopping power. It has a 4.1-gal fuel tank and 445-lb claimed curb weight.

From an ergonomic standpoint, a 21.9-inch tapered handlebar is set forward and positioned to offer a “sporty yet comfortable” riding position, as is the foot-peg position. Seat height is 31.9 inches. The 2023 Honda CB650R comes in Matte Gray Metallic starting at $9,399.

Whether you’re a beginning looking for your first bike or a veteran rider looking for a fun ride, Honda says the 2023 CBR500R, originally launched in 2013, offers “the excitement of a sportbike in a smaller package.”

The light-middleweight sportbike has an 8-valve 471cc parallel-Twin with crankshaft pins phased in at 180 degrees, working together to create what Honda says is good low-to-midrange power and torque in the 3,000 to 7,000 rpm range.

The CBR500R features a Showa SFF-BP fork and an adjustable ProLink single-tube shock absorber found on larger-capacity sport bikes. Braking is provided by dual 296mm petal-style discs and radial-mounted Nissin two-piston calipers in the front and a single-piston caliper and 240mm petal-style disc in the rear. It has a 4.5-gal tank and 423-lb curb weight.

The CBR500R has straight, wedge-like feature lines and extended lower fairings, and the rider’s seat pad and seat unit – plus the upper and side fairings – are narrow to improve ergonomics and movement. The 2023 Honda CBR500R comes in Grand Prix Red and Sword Silver Metallic and will be available summer 2023 starting at $7,299.

Similar to the CBR500R, the CB500F naked bike was also launched in 2013 and features an 8-valve 471cc parallel-Twin and crankshaft pins firing at 180 degrees. It also shares the suspension and braking power of its stablemate.

However, Honda says the naked form of the CB500F “exudes aggression.”

“Led by the sharply chiseled headlight with extra-powerful LEDs, the machine’s stance is low-set and ready for action,” Honda states, adding that the side shrouds interlock with the fuel tank and “fully emphasize the engine, while the side covers and seat unit continue the theme of muscular angularity.” The compact front fender is drawn directly from the CB650R.

Rounding out Honda’s light-middleweight family featuring the 8-valve 471cc parallel-Twin, the CB500X was also introduced in 2013. A 2016 upgrade included a larger fuel tank and more wind protection via an adjustable screen (56.9 inches and 55.5 inches). The bike also gained LED lighting, a spring preload-adjustable fork and an adjustable brake lever. Another evolution happened in 2019, with a switch to a 19-inch front wheel (from 17 inches) and longer travel suspension. The CB500X received additional improvements for the 2022 model year and is back for 2023.

The 2023 Honda CB500X will come in Pearl Organic Green and will be available in February starting at $7,299.

Honda says that with its Baja heritage, the XR650L continues to be a hit with dual-sport customers, as it “opens doors to adventure on single-track trails, dirt roads and backroads, while also delivering capable and affordable transportation in the city.”

The XR650L has a 644cc SOHC four-stroke engine, Radial Four-Valve Combustion Chamber (RFVC), and 42.5mm constant-velocity (CV) carburetor. It has a Pro-Link Showa single-shock in the rear with spring-preload, 20-position compression- and 20-position rebound-damping adjustability, and 11.0-inch travel rear shock, and in the front is a 43mm Showa fork featuring 16-position compression damping adjustability.

The 2023 Honda Fury represents Honda’s cruising chopper-style design and features a liquid-cooled 1,312 52-degree V-Twin with a single-pin crankshaft and three-valve dual-plug combustion chamber. It has adjustable front and rear suspension, a 336mm disc with a twin-piston caliper up front, and 296mm disc with single-piston caliper in the rear. ABS is standard. With a 32-degree rake, hard-tail styling, and 26.9-inch seat height, Honda calls the Fury a “rolling work of art.” 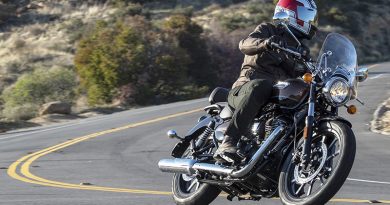 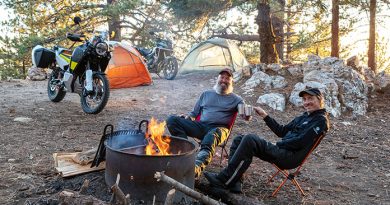 Motorcycle Camping on a Honda CB500X and Husqvarna Norden 901