Fresh N Lean Progressive Yamaha’s Jake Gagne earned his eighth pole position of the 2022 season in advance of this afternoon’s MotoAmerica Medallia Superbike race one at Barber Motorsports Park. Gagne, who used his teammate Cameron Petersen as a rabbit in Q2, set a new lap record in the process – a 1:22.035 – to beat Petersen’s day-old record from Friday.

Gagne’s qualifying effort puts him in perfect position to defend his championship as he will start both races from the point. He said that chasing Petersen helped him shave time off his best lap and also referred to Barber as “Petersen Motorsports Park.” Petersen loves Barber and it was the site of his first career Superbike victory last year.

While Gagne is confident and calm, his rival for the championship – Warhorse HSBK Racing Ducati NYC’s Danilo Petrucci – is at the other end of the spectrum. Although he went faster than yesterday, the Italian is still struggling to get comfortable and will line up on the second row of the grid after qualifying fifth.

Scholtz’ best put him a tick over a second off Gagne’s best with Jacobsen just .186 of a second behind Scholtz. Despite improvements over yesterday, Petrucci is 1.3 seconds behind Gagne. 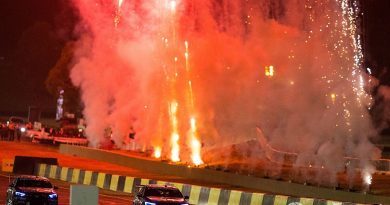