Barkbusters hand guards were one of the first accessories I installed on my new 2009 BMW F 800 GS. Over the ensuing years they’ve survived numerous drops, dumps and branches, suffering only scratches. Most importantly, my hands and levers remained intact. Their performance on my GS made it a no-brainer to install them for up-front protection on our long-term Yamaha Ténéré 700.

Made by Rideworx in Australia, Barkbusters have been in production since 1984. There are two basic types, differentiated by their mounting systems: single-point mounts are designed for wind protection only, whereas two-point mounts provide impact protection as well. In either case, the backbone of the system is a stout, heat-treated aluminum bar. The two-point style is reviewed here.

Bike-specific builds are available for all kinds of motos, from naked bikes to adventure machines. I chose the whole enchilada for the T7: aluminum backbones ($99.90), VPS style hand guards with wind deflectors ($36.90) and skid plates for the backbones’ impact zones ($17.90), for an all-in price of $154.70. Of the several hand fairing styles available, the VPS units come in the widest variety of colors. Their wind deflectors mount to the fairing with two screws and are easily removed for warmer rides.

Using the clear instructions, the installation took less than an hour. New bar-end weights replace the stock units, providing a mount for the 10mm x 20mm aluminum backbone at the end of the handlebar. The second mount is fixed by a clamp that attaches farther down the bar. Finding the sweet spot for the clamp on the handlebar and adjusting its angle took some fiddling, as did getting the left and right backbones aligned. But the most difficult part of the install was tightening the stainless steel clamp screws, which wouldn’t be an issue with a bit more room to fit a wrench on the nuts. The skid plates go on the backbones before securing the bar ends. Final steps are snapping the hand fairings onto the backbones, securing each one with two screws and fitting the wind deflectors.

In use, the Barkbusters don’t interfere with the levers or other controls; they just mind their own business while keeping the wind off your hands. But when branches lash at your knuckles or a get-off threatens your levers, they rise to the challenge. I’ve ridden mine into the ground more than once, saving my hand from getting pinched by the handlebar, or worse. Twelve years in, I’m still using Barkbusters.

For more information or to order, visit pacificpowersports.com 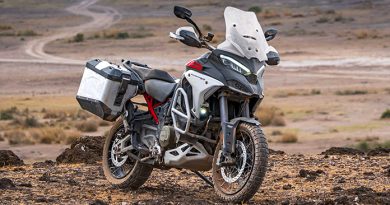 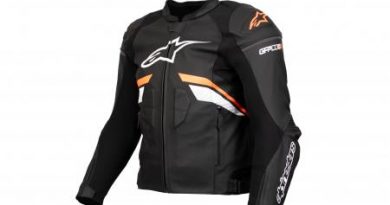