The Suzuki Hayabusa has received its first major update since 2008. We put it to the test on the track and the street. (Photos by Kevin Wing)

Rewind the clock to 1999. We were approaching the end of the millennium, and it felt like the science-fiction future was just around the corner. The carefree among us were ready to party like Prince, while worrywarts feared a Y2K-induced doomsday for the world’s computers.

That’s the same year that Suzuki introduced a big, bulbous sportbike called the GSX1300R. Appended to its alphanumeric model designation was an unfamiliar name — Hayabusa — the Japanese word for the peregrine falcon, a bird renowned for its ability to exceed 200 mph. Was Suzuki’s 173-horsepower bird of prey capable of the same feat?

The Hayabusa has always had swoopy, aerodynamic bodywork. Designers and engineers spent time in a wind tunnel to massage the new model’s shape.

The top-speed wars of the late ’90s, with the Kawasaki Ninja ZX-11 defeated by the Honda CBR1100XX Blackbird, and the Blackbird defeated by the Hayabusa, caught the attention of European bureaucrats. To avoid regulation or an outright ban on powerful sportbikes, motorcycle manufacturers voluntarily agreed to a top-speed limit of 186 mph (300 kph).

With its slippery bodywork and long wheelbase, the big ’Busa wasn’t designed for roadracing. But that didn’t stop us — back in the day I was part of a team that raced two Hayabusas in a WERA 24-hour endurance event at Willow Springs. Meanwhile, it was the hottest bike on the dragstrips.

Things get blurry in a hurry when you twist the Hayabusa’s loud handle.

Fast forward two decades, and I’m riding the third-generation Hayabusa on the track at Utah Motorsports Campus, pushing the limit to the point of being uncomfortable. Was I tempting fate?

Near the end of UMC’s long front straight, my speed approaches 175 mph. Pop up out of the bubble, get on the binders, set up for Turn 1. Adrenaline is flowing, everything’s happening really fast. Is it possible to have a blast and shit yourself at the same time?

Suzuki’s design brief for the new Hayabusa was “The Refined Beast.” In other words, make the bike better without reinventing the wheel. The Hayabusa’s last major update was back in 2008, when it got a larger engine, a new frame, and other upgrades. Architecture and displacement of the 1,340cc inline four haven’t unchanged, but the engine was thoroughly revised to meet Euro 5 and deliver more low- and midrange power.

The Hayabusa’s 1340cc inline four was thoroughly reworked. New or updated parts are shown in yellow.

The Hayabusa’s prime directive is to go fast in a straight line, but it likes to go around corners too.

Wrapped in panels of wind-tunnel-tested aerodynamic bodywork and weighing 582 pounds, the Hayabusa is a big bike, almost intimidating at first. With its swooping lines and aggressive curves, it looks as fast as it goes. A 50/50 weight distribution and a low center of gravity help the Hayabusa feel agile. The tight, sporty rider triangle and 31.5-inch seat height suit my 5-foot, 9-inch frame. I was able to move around the cockpit freely and use the controls easily.

What could be better than a constant-radius corner on a blue-sky day?

Suzuki hosted a two-day launch, and we spent the first day plying canyon roads in the Wasatch Mountains east of Salt Lake City. On the road, the ’Busa was in its element and exhibited confident, stable handling. Negotiating tight sections required some effort, but I had no problem picking a line, turning in, and making midcorner adjustments as needed. The fully adjustable KYB suspension provided a comfortable, compliant ride, and it just floated over rough pavement.

With tons of smooth power, agreeable ergonomics, and cruise control, the Hayabusa is the ultimate sport-tourer.

Throttle response was spot-on, with no hesitation or flat spots, and there’s a ridiculous amount of velvety-smooth power available at all times. All it took was a small amount of throttle to make the scenery blur, and gear choice was irrelevant. On the freeway, the Hayabusa never felt stressed, there was a ton of roll-on power for quick passes, and the new cruise control was really well sorted.

On a bike this big and fast, strong brakes are essential, and the new Brembo Stylema front calipers and 10mm-larger 320mm rotors did an excellent job of slowing the beast down. The new linked ABS system, which distributes braking force between the front and rear, worked well on the street. Trail braking into corners, I could feel the system engage the rear brake to settle the chassis.

The Hayabusa’s full electronics package (Suzuki Intelligent Ride System) allows you to tailor the ride experience to road or track.

For both street and track riding, the electronic riding aids allowed me to tailor the Hayabusa’s performance and behavior to the conditions. On public roads, I selected mode B (Basic), which softened throttle response but still allowed full power and put traction control and anti-lift (LF) control in the middle of the range. Mode C (Comfort) reduces power and maximizes TC and LF intervention. On the track, I opted for Mode A (Active), which provides more aggressive throttle response, max power, and minimal intervention. Suzuki’s linked ABS, which uses the IMU to adjust intervention based on lean angle, can’t be turned off. It was helpful on the street, but I found it to be somewhat of a hindrance on the track.

A closed course is the only suitable place to explore the Hayabusa’s limits. There’s more than enough power, so the challenge comes with managing chassis dynamics. There’s no getting around the ’Busa’s size and weight, but its stout twin-spar aluminum frame communicates the desired feel and feedback for attacking corners at a sane pace. As my laps accumulated, my speed and comfort level both increased.

The bike was well-balanced and responsive to inputs, allowing me to confidently throw it from side to side to the point of scraping the peg feelers and the exhaust. After a few sessions we made some suspension adjustments — less rebound, more compression — that reduced the Hayabusa’s tendency to pitch front to back on corner exits. Then it really came alive, making corner entry and exit much more predictable.

New Bridgestone Battlax Hypersport S22 tires provided good grip, and the limits of their adhesion were kept in check by the lean-angle-sensitive traction control. Late in the day when the bike was sorted, I was having a great time. I had found my rhythm, and the TC light was flashing out of every corner while I was leaving black marks in my wake. The onboard computer tracks all sorts of cool data — max lean angle, braking pressure front and rear, rates of acceleration and deceleration, etc. — which made for some fun bench racing between sessions.

The Hayabusa’s trademark rear hump can be removed and replaced with a pillion seat. Passengers are encouraged to hang on tight.

All in all, the new Hayabusa is an impressive bike. Looks fast, goes fast, and has all the modern bells and whistles. Maybe it’s time to repeat the comparison test we did back in 2008, when we strapped tank bags and tail bags to a Hayabusa and Kawasaki Ninja ZX-14R and hit the road for a couple days of hypersport touring. 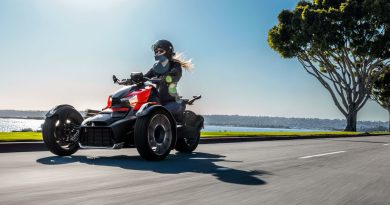 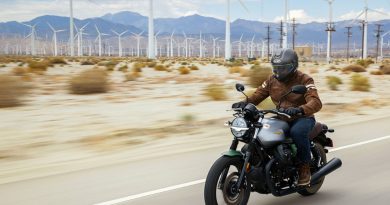 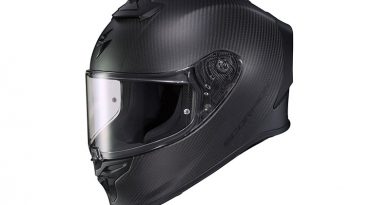