A lot of work goes into each MotoAmerica season, and for the riders, teams, and especially the MotoAmerica staff, that work begins pretty much right after the previous season ends. There are racetracks to negotiate with, schedules to make, old rules to be revised, new rules to be made, and new motorcycles to be approved for racing in the MotoAmerica series.

When word (and photos) came from Aprilia last year that they were debuting an all-new middleweight twin-cylinder motorcycle—the RS660—sportbike fans salivated, some of the MotoAmerica Twins Cup teams’ and riders’ hearts palpitated, and the powers that be at MotoAmerica started the process of discovering if the high-spec machine will conform to the series’ rules.

MotoAmerica Technical Director Tige Daane pored over the specs of the machine, communicated with Aprilia, spoke with some of the Twins Cup teams and riders, and studied printouts of the RS660’s horsepower and torque output as measured by various dynamometers.

All well and good for getting the new Aprilia into MotoAmerica’s Twins Cup show, but Daane still needed to “see for himself.” He also wanted to compare the bike’s horsepower, torque, and power curve with some other motorcycles that had already been competing in Twins Cup.

Over the past weekend, Daane took a trip to Hamilton, Ohio, which is the headquarters for Robem Engineering, one of the more prominent teams in the Twins Cup class. Robem Engineering’s 2020 riders included Jackson Blackmon and Toby Khamsouk, as well as supported riders Carl Price, Darren James, Kaleb De Keyrel, and Hayden Schultz.

Spicer’s shop is equipped with a Dynojet dynamometer, and the team had already received a brace of Aprilia RS660’s. In addition, Jackson Blackmon’s Suzuki SV650 and Darren James’ FZ-07/MT-07 racebikes were on hand to also run on the dyno and compare numbers with the new Aprilia. Also, the group tested the RS660 with the stock exhaust and then with an aftermarket system.

“I’m already well into the process of approving the Aprilia RS660,” Daane said. “This trip to Robem is a confirmation of some of the horsepower and torque numbers that have been measured on the bike. Being here ensures that I am seeing everything with my own eyes. Not that I don’t trust the information that Aprilia and other sources have provided. It’s just for due diligence and to make sure all the t’s are crossed and i’s dotted.”

And so, Tige Daane came, he saw, and…the process continues. He’s got the numbers he needs for MotoAmerica to make a decision on the eligibility for the Aprilia RS660 to compete in the 2021 Twins Cup Championship.

Will it happen? Stay tuned. 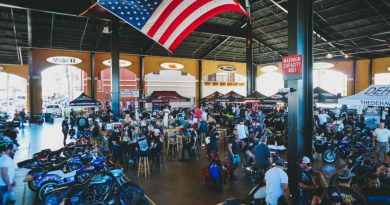