Joe Roberts finished third on the track, but was docked a position to fourth in today’s Italian Grand Prix at Mugello. Photo courtesy of Italtrans Racing.

It was a stellar day in Italy for Americans today in Italy with Italtrans Racing’s Joe Roberts finishing fourth while American Racing’s Cameron Beaubier finished eighth in the Moto2 GP after qualifying 26th. For Roberts, the outcome was tarnished by heartbreak, however, as he crossed the line in third before his podium finish was snatched away after it was deemed the Californian had exceeded track limits on the final lap of the race.

Racing on Sunday was marred by news prior to the start that Swiss Moto3 rider Jason Dupasquier had passed away from injuries suffered in the horrific crash during qualifying on Friday.

Roberts started marching forward from the start after qualifying 10th and his battle with SKY Racing Team VR46’s Marco Bezzecchi became a fight for the final podium spot when Brit Sam Lowes crashed out of the race. Roberts earnd the spot as he crossed the line in third, only to find out when he returned to the hot pit that he’d lost the position due to the penalty.

Beaubier again showed that not many are better when it comes to race day as he put on a race-long charge through the pack to eighth after qualifying 26th, thus gaining 18 positions. It was the five-time MotoAmerica Superbike Champion’s best finish of the season as he came out on top of what was a seven-rider battle for eighth with the seven separated by just 1.3 seconds at the finish line.

Cameron Beaubier had his best finish of the season in Moto2, the five-time MotoAmerica Superbike Champion finishing eighth. Photo courtesy of American Racing.

The race was won by Australian Remy Gardner, the KTM Ajo Racing rider running down his teammate Raul Fernandez to capture his first win of the season by just .014 of a second. The victory also extended Gardner’s championship lead to six points.

Roberts is sixth in the title chase with Beaubier now up to 14th. 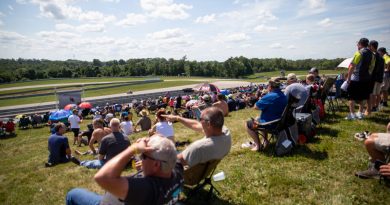 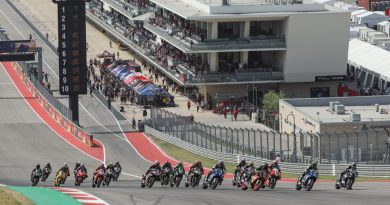 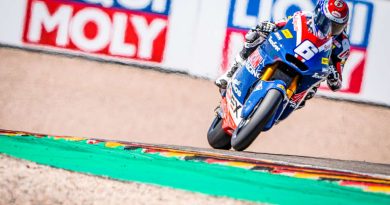