The race was won by Federal Oil Gresini Moto2’s Fabio DI Giannantonio by 1.7 seconds over Marco Bezzecchi, who in turn was half a second ahead of Elf Marc VDS Racing Team’s Sam Lowes. Red Bull KTM Ajo teammates Remy Gardner and Raul Fernandez rounded out the top five.

Roberts was closing on IDEMITSU Honda Team Asia’s Al Ogura but came up .210 of a second short at the finish line. Roberts, however, was a comfortable, by Moto2 standards, 1.884 seconds ahead of Inde Aspar Team’s Aaron Canet.

“I’m a bit disappointed with the race,” Roberts said in a team release. “We had the potential to do more, but for some reason from the first lap I struggled to find the right feeling with the rear and I struggled all the race. Anyway, the eighth place is good as we got some points for the championship. Let’s go to Le Mans, which is one of my favorite circuits.”

Beaubier was having a solid outing and had passed his American Racing teammate Marco Ramirez going into the final lap. The five-time MotoAmerica Superbike Champion was right on the rear wheel of Marcel Schrotter on the final lap and crashed trying to pass the German for 10th place.

Gardner’s 69 points leads the Moto2 World Championship by three over Lowes with Fernandez another three points behind in third. Roberts is now sixth in the title chase with 31 points. Beaubier is 14th with 12 points in his rookie season. 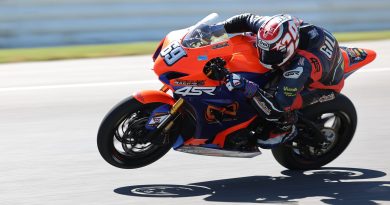 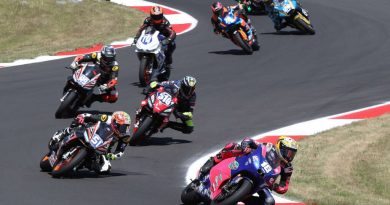