The ever-growing Twins Cup class will feature 42 entries for its second round of the Auto Parts 4 Less MotoAmerica Championship at Michelin Raceway Road Atlanta, April 22-24. Photo by Brian J. Nelson

The third of what are basically three opening weekends of the 2022 Auto Parts 4 Less MotoAmerica Championship kicks off this weekend at Michelin Raceway Road Atlanta with the first round of the season to feature all seven of the MotoAmerica classes.

With the Daytona International Speedway round featuring the non-championship points-paying Daytona 200 and the opening rounds of both the Mission King Of The Baggers Championship and the Roland Sands Design Super Hooligan Championship, and the Circuit of The Americas consisting of Medallia Superbikes-only, the season kicks off in earnest this weekend in Georgia with seven MotoAmerica classes taking to the track: Medallia Superbike, YUASA Stock 1000, Supersport, SportbikeTrackGear.com Junior Cup, round two of Twins Cup, round two of Mission King Of The Baggers and round two of the Roland Sands Design Super Hooligan Championship.

Thirty-nine riders have entered the YUASA Stock 1000 class as the series open its season at Michelin Raceway Road Atlanta and with last year’s class champion Jake Lewis heading to a full-time Superbike ride this year, the championship is there for the taking.

Who the favorites are to battle for the title is crapshoot, but it would start with the three riders who finished within three points of each other: championship runner-up Travis Wyman, third-placed Corey Alexander and Michael Gilbert, who ended up fourth but just three points short of second.

Wyman and Alexander will race in the all-new Tytlers Cycle/RideHVMC Racing team on BMW M 1000 RRs with Gilbert aboard a Suzuki GSX-R1000 for his self-owned Cycle World/Octane/Chuckwalla Valley Racing team.

Although those three were the next best thing to Lewis last year, they will be challenged in 2022 and that challenge will likely be led by class rookie Brandon Paasch. After all, Paasch is riding for the team that has won the last two Stock 1000 Championships – Altus Motorsports (in 2020 with Cameron Petersen and in 2021 with Lewis). Paasch, however, arrives in Atlanta with a shoulder injury suffered in a preseason testing crash.

Even though he comes to the class on a new motorcycle and on a different team, 2013 AMA Superbike Champion Josh Herrin begins the MotoAmerica Supersport Championship as the favorite to take the crown. Riding a Warhorse HSBK Racing Ducati NYC Panigale V2 in his return to Supersport-class racing, Herrin’s resume is the strongest in the class as he is an eight-time Superbike race winner. Herrin also finished second in the MotoAmerica Supersport class in 2015 with four wins and 11 podium finishes.

Herrin also got plenty of time on the V2 bike in the Daytona 200, a race for which he qualified on pole for but ended up 10th after some pit-stop miscues.

The bottom line: He might be favored, but it won’t be easy.

With 2021 MotoAmerica Supersport Champion Sean Dylan Kelly and 2020 class champion Richie Escalante both leaving the class for 2022, the series promises to be a wide-open affair. If you predict this year’s championship chase based on last year, then Vision Wheel M4 ECSTAR Suzuki’s Sam Lochoff would be one of the favorites. After all, he finished third to the aforementioned Kelly and Escalante last year and beat both of them in a straight fight for his first-career victory at New Jersey Motorsports Park in the penultimate round.

With several of the top guns moving out of the SportbikeTrackGear.com Junior Cup class, that championship is most definitely wide open and ready for whoever steps up to be next. Case in point: There are only two previous race winners entered for the Junior Cup opener at Road Atlanta.

Based on last year’s championship and what is left of the class from a year ago, Rodio will start the year as the favorite as he ended up third overall in last year’s title chase. Wyman, meanwhile, ended up fifth in the point standings. Next up is Max Van with the SportbikeTrackGear.com-backed Michigander ending up seventh in the 2021 championship.

Another who could fare well is Joseph LiMandri Jr, the SportbikeTrackGear.com-sponsored rider earning three straight podium finishes near the end of last year’s campaign to finish 10th in the championship – despite not running a full schedule.

Big things are also expected of Californian Owen Williams with the Michael Gilbert Racing rider set for his first full season in the class.

So where did all the Junior Cup racers go? Twins Cup, it seems. And one of them has already won a race as the series got started with two races held in conjunction with the Daytona 200 in March. That rider was N2 Racing/BobbleHeadMoto’s Blake Davis, the 15-year-old Virginian taking race one in Daytona to score his first career MotoAmerica win.

The rider to win the other Twins Cup race in Daytona? That would be Cycle Tech’s Hayden Schultz with what was also his first career MotoAmerica victory. Ironically, both Davis and Schultz failed to finish the races that they didn’t win at Daytona, and it’s Robem Engineering’s Teagg Hobbs who leads the title chase by two points over Veloce Racing’s Jody Barry as the series heads to Road Atlanta.

Rodio Racing/Warhorse HSBK Racing’s Anthony Mazziotto is third in the championship and one of the riders favored to contest for the title.

With their two wins and two DNFs, Davis and Schultz are tied for fourth, just two points clear of Wrench Motorcycles’ Jackson Blackmon.

Mission Foods/S&S Cycle/Indian Challenger Team’s Tyler O’Hara rumbles into Michelin Raceway Road Atlanta with a seven-point lead over his teammate Jeremy McWilliams in the Mission King Of The Baggers Championship after the two Indian racers split wins in the season opener at Daytona International Speedway.

H-D Screamin’ Eagle’s Travis Wyman is third in the championship standings after finishing second and fifth at Daytona. Fourth is held by Roland Sands Design’s Bobby Fong on his Indian Challenger, four points ahead of Vance & Hines Racing’s Taylor Knapp.

You have to scan down to sixth on the championship point standings sheet to find defending series champion Kyle Wyman, with the HD Screamin’ Eagle rider 29 points behind his Indian-mounted rival O’Hara as the 17-strong King Of The Bagger entries arrive to do battle at Road Atlanta.

Harley-Davidson has been working and testing diligently since Daytona to fix the gearbox issues that plagued both Wyman brothers in Florida and that included two days of testing at Road Atlanta.

The Roland Sands Design Super Hooligan class was also featured at Daytona with just one race held after the second scheduled race was scrapped due to inclement weather. The Hooligans will make up for the rained-out race with two races scheduled for Michelin Raceway Road Atlanta.

The Daytona race was won by JLC Concrete/KTM/DiBrino Racing’s Andy DiBrino over Saddlemen/Lloyd’z Garage’s Cory West with Roland Sands Design’s Tyler O’Hara finishing third and those three will again be the pre-race favorites in Georgia.

Saturday’s races will be run in quick succession with YUASA Stock 1000 starting things off at 1:10 p.m., followed by Supersport race one at 2:10 p.m. Medallia Superbikes will go off at 3:10 p.m. followed by SportbikeTrackGear.com Junior Cup race one at 4:10 p.m. Saturday’s action will conclude with Roland Sands Design Super Hooligans race one at 4:45 p.m.

Sunday’s action starts earlier with the YUASA Stock 1000 race going off first at 12 p.m. followed by Mission King Of The Baggers at 12:35 p.m. Supersport race two is scheduled for 1:15 p.m. with SportbikeTrackGear.com Junior Cup race two getting the green lights at 2:10 p.m. Medallia Superbike race two will go green at 3:10 p.m. with the second of two Roland Sands Design Super Hooligans races ending the race action with a 4:10 p.m. start time.

The Michelin Raceway Road Atlanta paddock will be a busy place this weekend with the seven classes drawing 200 entries.

The biggest class when it comes to entries is the 42 for this year’s Twins Cup races. As for manufacturer involvement in Twins Cup, Yamaha leads the way with 18 entries, Aprilia is next with 13 riders signed up to race the RS 660, and there are 11 Suzuki SV650s entered.

Last year’s Twins Cup races were won by Kaleb De Keyrel and Teagg Hobbs, but it was Trevor Standish who left Road Atlanta with the championship points lead after finishing fourth and second in the two races.

Tyler Scott and Ben Gloddy split wins in last year’s SportbikeTrackGear.com Junior Cup with Scott winning race one on his KTM and Gloddy taking race two on a Kawasaki. The pair left Georgia tied on points at the top of the point standings with 45 points apiece.

Sean Dylan Kelly was perfect in the two Supersport races last year with the Floridian topping his rival Richie Escalante in both races. Kelly is now racing in the Moto2 World Championship where he is teammates on the American Racing squad witg five-time MotoAmerica Superbike Champion Cameron Beaubier.

The first Stock 1000 race of the season last year was won by Michael Gilbert with Travis Wyman winning race two.

Tyler O’Hara won the opening round of the 2021 Mission King Of The Baggers Championship with the Californian and his Indian topping Kyle Wyman and his factory Harley-Davidson. Frankie Garcia ended up third on his Roland Sands Design Indian.

Kaleb De Keyrel’s next Twins Cup victory will push him to the top of the heap on the all-time Twins Cup win list. De Keyrel is currently tied for the lead in Twins Cup wins with Rocco Landers with nine wins apiece. Nineteen different riders have won Twins Cup races with the class getting started in 2018. Last year’s season produced the most parity in the class with seven different winners in the 14 races.

The post It’s All Go With Seven Classes Of MotoAmerica Action At Road Atlanta appeared first on MotoAmerica. 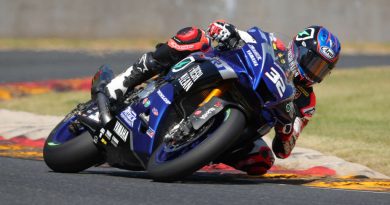 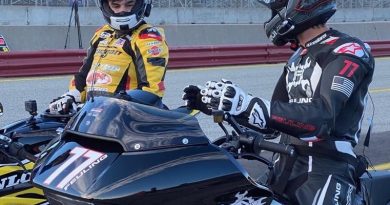 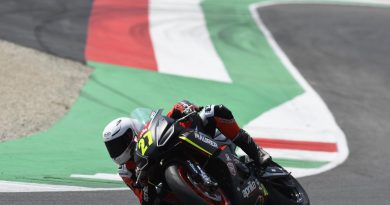