South Australia has upped the ante on its anti-hooning laws where the culprit will pay a hefty fee to release their vehicle from 28 days’ impoundment for incidents such as popping a wheelie or doing a burnout.

If not, their car or motorcycle will be crushed or sold for scrap metal.

From 1 July, the Criminal Law (Clamping, Impounding and Forfeiture of Vehicles) Act 2007 includes a fee of $1135.50 to 1395.50 to release an impounded vehicle from South Australian police after the 28-day confiscation period ends.

Payment plans are not permitted.

And get this … if you decide to have your bike scrapped instead of paying the fees to released it, the government will still charge you $320 as a scrapping fee!

Vehicles can be impounded or clamped if a person has been charged, arrested or reported for up to 23 prescribed offences including dangerous driving, drink and drug driving, driving an unregistered or uninsured vehicle or without a licence, speeding, leaving the scene of an accident, failing to obey police, or misuse of a motor vehicle.

Even popping a wheelie or doing a burnout are termed “misuse of a vehicle” or dangerous driving and come under the tough anti-hooning laws. Offenders also cop four demerit points.

We’ve all popped wheelies in our time, but be aware that rather than a display of riding skill, it is now considered hoon behaviour with dire consequences.

The toughest laws are in Western Australia where dangerous or “anti-social driving” will result in your bike being impounded for 28 days for a first offence and three months for a second offence. There are also fines up to $3000 and demerit points.

In Queensland, your bike could be confiscated for 90 days – the longest impoundment period in Australia.

Do it again in the next five years and your bike could be sold or crushed. No third strike rule there. Two strikes and you’re out!

The Queensland hoon hotline is 13HOON or 134666. (Note the last three numbers. Coincidence? We think not!)

Victoria upped the anti-hoon ante in 2011 when they increased the confiscation period for first offences from 48 hours to 30 days. Score three strikes in three years and your vehicle can be sold or crushed.

You could also be charged with “careless driving” and cop a $295 fine and three demerit points.

In NSW, police can confiscate your number plates on the spot or impound your vehicle for three months for street racing and burnouts, but owners can apply to the courts for an early release. Repeat offenders can lose their vehicle permanently.

Wheelies could be considered either negligent “driving” (up to $623 fine) or dangerous ($2200 for a first offence).

In Tasmania, “reckless or dangerous driving” can result in clamping or impounding the vehicle even if it isn’t yours, arrest, a court appearance, $600 fine, loss of licence for up to two years, or jail for three months. And that’s for a first offence!

Subsequent offences mean the vehicle could be forfeited.

And remember, video evidence from an action camera on your helmet or bike could incriminate you!

The post Hoons may lose their motorcycle appeared first on Motorbike Writer. 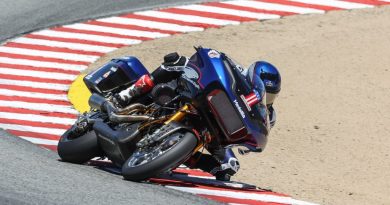