The SportbikeTrackGear.com Junior Cup class promises plenty of action at the front with the MotoAmerica Championship visiting Ridge Motorsports Park in Shelton, Washington, this weekend. Photo by Brian J. Nelson.

Coincidentally, the only two of the five MotoAmerica Championships that aren’t close as the series heads to round five of the series at Ridge Motorsports Park in the Pacific Northwest feature identical 51-point leads for the two riders at the top. Those two championships are Supersport and Twins Cup. Those two riders are Josh Herrin and Jody Barry.

The closest of the championships heading to Washington State and the Dynapac MotoAmerica Superbikes At The Ridge event is the Yuasa Stock 1000 class with just six points separating first from second. In the Medallia Superbike class, just seven points separate Danilo Petrucci from his nearest pursuer Mathew Scholtz. In the SportbikeTrackGear.com Junior Cup class, 17 points separate the top two.

Supersport – All Herrin. So Far.

With five podium finishes in the six races held thus far, Warhorse HSBK Racing Ducati NYC’s Josh Herrin has been dominant. Three of those podiums have been victories and his only non-podium was a fourth-place finish in race one at VIRginia International Raceway.

And it’s not that his pursuers have been slow. Quite the opposite, actually. In fact, four different riders have won races in 2022 on four different makes of motorcycles. What separates Herrin from the rest is a lack of consistency, not a lack of parity.

Landers Racing’s Rocco Landers sits second in the series point standings after six races with 73 points to Herrin’s 124. Landers has finished third on three occasions but was fourth and fifth in two of the other three. At the last round at Road America, Landers only managed to score a single point in race two.

And that single point was one more than the two also trying to chase down Herrin – the Vision Wheel M4 ECSTAR Suzuki duo of Tyler Scott and Sam Lochoff – with both riders failing to finish race two at Road America.

Scott is third, just one point behind Landers and with three podiums and a victory on his scorecard. Just 16 years old, Scott can’t be faulted for making mistakes and he’s made two. But he should also be praised for scoring a victory in race one at Road America in what was just his fifth career Supersport race.

Thus far, Scott has outpaced his teammate Lochoff, but the South African has been riding injured. Still, Lochoff has two podiums to his credit and is just six points behind Scott.

Australian Luke Power is fifth in the title chase after his second-place finish in race two at Road America in iffy conditions. Power and his 3D Motorsports LLC Suzuki GSX-R750 are six points behind Lochoff and just one point ahead of N2 Racing/BobbleHeadMoto’s Kevin Olmedo, who has shown newfound consistency with finishes in each of the six races so far.

The two others to win Supersport races in 2022 are four-time AMA Superbike Champion Josh Hayes (race one at VIR) and Kawasaki ZX-6R-mounted Jason Farrell, who scored an upset victory in the rain in race two at Road America.

Just when it looked like Hayden Gillim was going to step up and take control of the Yuasa Stock 1000 Championship, the veteran’s Disrupt Racing Suzuki had a mechanical problem in the lone Stock 1000 race at Road America and his big lead in the championship was suddenly whittled down to just six points.

And there’s now a gaggle of riders in with a shot of contesting the championship as the series heads to Ridge Motorsports Park.

Tytlers Cycle/RideHVMC Racing’s Travis Wyman is at the top of the heap, just one point ahead of VisionWheel/DiscountTire/KWS’s Geoff May. Wyman’s teammate Corey Alexander arrives in Washington fresh off his second victory of the year at Road America and with a renewed sense of championship possibilities. The New Yorker is now just 13 points behind Gillim in the title chase.

With his three race wins out of six races, Alpha Omega’s Cody Wyman heads the chasing pack in the SportbikeTrackGear.com Junior Cup Championship by 17 points over Rodio Racing/Warhorse HSBK Racing’s Gus Rodio, who is the only rider in the top six to score points in all six races.

Rodio, however, doesn’t have it easy as three racers are within eight points of his tenacious hold on second in the title chase. Those three are SportbikeTrackGear.com teammates Joseph LiMandri Jr. and Max Van and Altus Motorsports’ Kayla Yaakov.

With four podiums, including two wins, LiMandri is one point behind Rodio and one point ahead of his teammate with Van scoring two victories and one other podium thus far. Yaakov, meanwhile, has three podiums to her credit and is just six points behind Van and 12 ahead of Calshine Racing’s Aden Thao.

There have been six Twins Cup races held thus far in 2022 and two of those were at Daytona International Speedway. Those were the only two races Jody Barry didn’t win.

Since Daytona, Barry and his Veloce Racing Aprilia RS 660 have been perfect with the youngster from Lake in the Hills, Illinois, winning four straight races as the series heads to Ridge Motorsports Park.

Oh, and he was also fifth and second in the two races he didn’t win at Daytona.

All that amounts to a 51-point lead in the championship over Rodio Racing/Warhorse HSBK Racing’s Anthony Mazziotto, the New Jerseyan also mounted on an Aprilia RS 660.

While Barry thus far has had things all his way, the battle behind him is fierce as Mazziotto leads Cycle Tech’s Hayden Schultz by just 11 points, Daytona race-one winner Blake Davis and his N2 Racing/BobbleHead Moto Yamaha YZF-R7 by 16 points and Robem Engineering’s Teagg Hobbs by 17.

With just one round and two races under their belts, the riders contesting the Mini Cup by Motul Championships are all in with a fighting chance.

As expected, the biggest of the classes is the 160 class and that is being led by American Racing’s Kensei Matsudaira, though the Californian hasn’t been perfect as Macc Racing/Broward Motorsports Tequesta’s Mac MacClugage also won a race in the series opener at Road America a few weeks ago. Matsudaira leads by nine points. Nathan Gouker Racing’s Nathan Gouker is just three points behind MacClugage and four ahead of Xtreme Autoglass Pros’ Ryder Davis.

Jesses James Racing’s Jesse James Shedden was perfect in the 190 class in the series opener at Road America with the Californian topping Matsudaira both times out. American Racing’s Joshua Raymond finished third in the two races.

Sean Dylan Kelly won both of the Supersport races at Ridge last year, the Suzuki rider besting his rival Richie Escalante in both races en route to taking the championship. Kelly is now racing in the Moto2 World Championship and Escalante has made the move to the Medallia Superbike Championship with Kelly’s former team, Vision Wheel M4 ECSTAR Suzuki.

With two Yuasa Stock 1000 races scheduled for Ridge, this round of the championship could prove vital. If you predicted this year’s outcome on last year’s results, you’d have to pick Corey Alexander, the winner of both races a year ago in Washington. Alexander beat Jake Lewis in race one and Ashton Yates in race two.

Jackson Blackmon was unstoppable with wins in both Twins Cup races a year ago at Ridge. Blackmon is currently recovering at home after suffering leg injuries in a crash at Road America.

In Mini Cup action from a year ago, Kensei Matsudaira was perfect in the two 110 class races and both of the 160 races. In the 190 class, Jesse James Shedden and Travis Horn split the two wins.

The post Herrin, Barry All Clear But The Rest Are Up For Grabs appeared first on MotoAmerica. 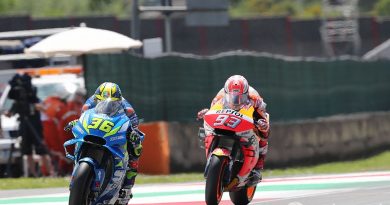 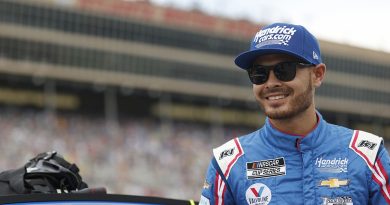 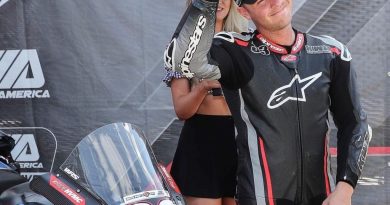