Gerloff on the way to a P7 in Race 1 and a Top Independent Rider finish. Photo courtesy of GYTR GRT Yamaha WorldSBK Team.

Garrett Gerloff, the former MotoAmerica Superbike rider who now races for the GYTR GRT Yamaha WorldSBK Team, finished seventh overall in FIM Superbike World Championship Race 1 at the Pertamina Mandalika International Circuit in Indonesia. The result enabled him to proudly loft the number one in parc fermé as the Top Independent Rider.

After finishing a very strong sixth in the morning’s Free Practice 3 session, Gerloff headed out for the Tissot Superpole qualifier. The Texan tried for a faster lap time in the latter stages, but he was unable to reach his full potential, and he ended up 10th-fastest, which put him on the inside of the fourth row on the starting grid.

All smiles on the starting grid for Gerloff at Mandalika. Photo courtesy of GYTR GRT Yamaha WorldSBK Team.

In Race 1, Gerloff got off to a good start and joined the top-five battle immediately. He started to move up the order on lap 13, making a move on Motocorsa Ducati’s Axel Bassani to take ninth, and then overtaiking BMW’s Michael van der Mark two laps later. With three laps to go, Gerloff got through on Kawasaki’s Alex Lowes, as well, crossing the finish line in seventh place.

“Overall, that was a good Race 1, even though it wasn’t easy,” Gerloff said. “Making moves here is really tricky. If you go just one meter off the line, it’s very easy to crash. Anyway, I enjoyed the battles, and the speed was not too bad. It’s also nice to be back on top in the Independent category. We’ll try to progress even more tomorrow.”

Gerloff will be back in action tomorrow for the Superpole Race at 10:30 a.m. followed by Race 2, which starts at 1:30 p.m. Both times local.

The post Gerloff Is Top Independent Rider In Race 1 at Mandalika appeared first on MotoAmerica. 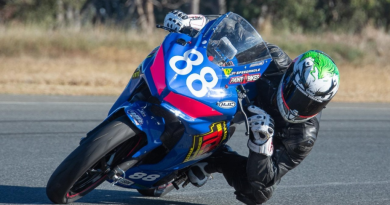