Jake Gagne had his hands full with Loris Baz in the first of two HONOS Superbike races on Saturday at WeatherTrack Raceway Laguna Seca. Photo by Brian J. Nelson

How close? Just a tick over a second and that was the biggest lead of the race as Warhorse HSBK Racing Ducati New York’s Loris Baz finished just 1.173 seconds behind Gagne after applying relentless pressure for the duration of the red-flag interrupted race.

“To see less than a second, you know if you run a little wide here, a little wide there, they’re going to be right on you,” Gagne said. “I’m lucky I got a couple great starts again. We managed to go down in turn two and not see anybody, which was nice. Like Loris (Baz) and Cam (Petersen) said, after that red flag with the heat cycle on those tires we were all sliding around pretty good, I think more than we had all weekend. So, when that happens you kind of run into some new issues. The bike feels a little bit different. I was pushing hard, though. I kept watching that pit board. I saw those guys were right there within a second, so I had nothing to do but go and go. That race went by quick. It’s been a while since we had a red flag, so I think after 15 laps it flies by so quick. Hats off to the Fresh N’ Lean Attack Yamaha team. These guys are working hard. I know we got to do some work tomorrow because everybody is going to be going faster. I think we can try some things in the morning warmup and see if we can’t get it rolling a little better. It’s going to be exciting.”

Baz was all smiles after having his best race of the season thus far in keeping Gagne.

“I think both starts sucked,” Baz said. “The others just did a normal start in the second. That’s the main thing we have to improve at the moment. I felt like we struggled to launch our bike. I managed to put some clean moves and nice moves on the corkscrew on Josh (Herrin) and Cam (Petersen). It didn’t cost me a lot. I think it’s not the start that cost me the win. Maybe the red flag cost me I believe more, because I had the soft rear and that tire, every time even in the session if we restart, I never have the same feeling. I was struggling with the rear grip from the beginning in the second half of the race. But also, they were riding super-fast. I was really surprised in the first part to see Josh (Herrin) so close to me because he was pretty far in the qualifying. Also, in the second part, I was pretty surprised to see Cam keeping the gap so close. I was just trying to keep the pressure as much as I could on Jake (Gagne), trying to come back without making any mistakes. He didn’t do any mistakes. He was just a little bit too fast again, but we’re closing. I think he won in Virginia with nearly 20 seconds. I could not see him after lap two. Now I could see him until the checkered flag, so that’s a big improvement. I’m happy. I want to thank the whole team because we didn’t have any weekends with any problems at the moment. We always have some bad luck happening, but luckily this weekend it didn’t happen in race time. It happened on Friday. So, I’m really happy and I want to thank them, the whole Ducati team because they do an amazing job for the first season.”

Baz had put a pass on Petersen early in the race in the Corkscrew that left an impression on the Suzuki rider.

“I don’t know how often you see somebody pass you on the right going into the Corkscrew up there,” Petersen said. “When I saw Loris (Baz) come up on the outside of me, at that point he had a lot of speed. I knew I couldn’t just let go of the brakes and try to hold it underneath him. It definitely caught me off guard. It was honestly just an unreal move. When he came by me and he got the thing slowed down and pulled it back to the apex, I was like, ‘You know what? You deserve that one.’ It was pretty damn impressive. It was a fun race though, nonetheless.”

Fourth went to another South African in the form of Westby Racing’s Mathew Scholtz, the Yamaha rider ending up 1.3 seconds adrift of his countryman Petersen and over 12 seconds ahead of Fresh N’ Lean Attack Performance Yamaha’s Josh Herrin. 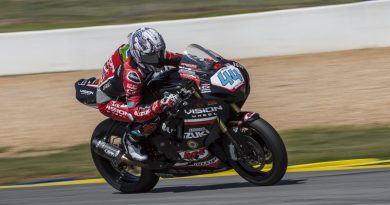 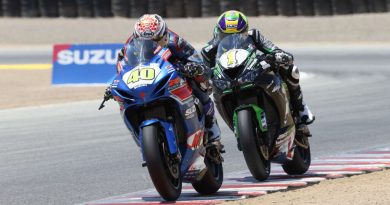 Kelly Over Escalante, Scott Over Gloddy On Day One At WeatherTech Raceway Laguna Seca 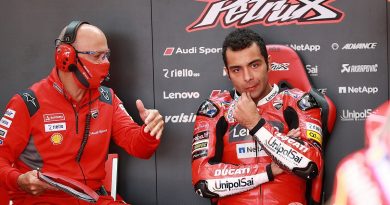