Fresh N’ Lean Attack Performance Yamaha’s Jake Gagne ended his Friday afternoon at Michelin Raceway with his YZF-R1 in the gravel trap on the outside of turn 10-B. But he also ended up on top of the timesheets in the HONOS Superbike class as the MotoAmerica Series opened its season on an overcast day in Georgia.

“It was a good day,” said Gagne. “The Yamaha came off the truck working really, really good. We got right up to a good speed this morning in the first practice and really only got one stint because we had some clutch issues and we had to bring the bike back. We didn’t get a lot of laps in that first session but in the second session we got going and tried some other tires and we threw down some pretty good times at the end there. Unfortunately, I ran wide in 10-A and was way too tight in 10-B and tried to hold it and lost the front. So, I threw it down, but it was easy for me. I scratched up the bike a little bit, but that’s racing. We learned a lot today and we can still fine tune some things for tomorrow and make things a little easier, but it will be a battle because these guys are all rolling good.”

As for setting a new lap record, Gagne said: “It’s good. For race tires, that made us happy. Obviously, it’s not as hot and greasy as it was last year so I think the tires are getting along a little bit better, but it was a good start.”

The provisional front row was filled by Warhorse HSBK Racing Ducati New York’s Loris Baz, the Frenchman making his MotoAmerica debut and turning in a 1:24.269 on his first visit to Michelin Raceway Road Atlanta.

Next in line were the two M4 ECSTAR Suzuki GSX-R1000s with Bobby Fong besting his new teammate Cameron Petersen with the pair turning in bests of 1:24.810 and 1:25.571, respectively.

Scheibe Racing BMW’s Hector Barbera, in his MotoAmerica debut, FLY Racing ADR Motorsports David Anthony and his teammate Jayson Uribe rounded out the top 10 on day one. Uribe, however, had a big crash at the close of the session.

Geoff May Racing/VisionWheel.com’s Geoff May topped the timesheets in Stock 1000 during Q1, lapping at 1:27.470 to best Michael Gilbert Racing’s Michael Gilbert by .359 of a second. Jones Honda’s Ashton Yates ended the day third fastest.

In Twins Cup, it was Innovative Motorsports/Mike’s Imports Teage Hobbs leading the way with his 1:34.951 on his Suzuki SV650, putting him ahead of the Robem Engineering Aprilia RS 660 of Kaleb De Keyrel. Righteous Racing’s Jody Barry ended up third fastest on his Aprilia RS 660.

Tyler O’Hara, the winner of last year’s King Of The Baggers Invitational, was the fastest of the big V-twins on Friday, the Californian riding his Mission Foods S&S Cycle Indian Challenger to the best lap of the first practice session for the Mission King Of The Baggers. Harley-Davidson Screamin’ Eagle’s Kyle Wyman was second with DTF Performance/Hoban Brothers Racing’s Michael Barnes third. 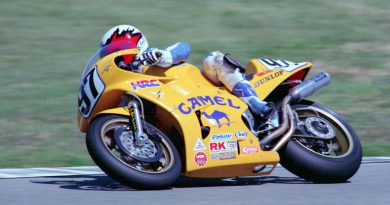 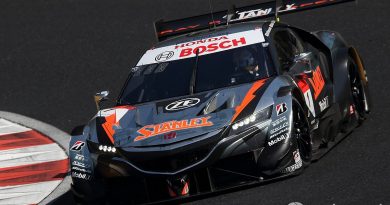 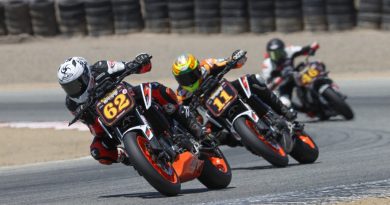