Defending series champion Jake Gagne led every lap of the restarted Superbike race one on Saturday at Ridge. Photo by Brian J. Nelson

Fresh N Lean Progressive Yamaha Racing’s Jake Gagne doesn’t lay in bed at night thinking about the MotoAmerica Medallia Superbike Championship point standings. He focuses on the present and the present is all about winning races. On a hot and sunny day in the Pacific Northwest, Gagne made it through three starts in the red-flag-interrupted race to win for the fourth time in 2022 – a few hours after earning pole position with a lap-record-setting performance at Ridge Motorsports Park.

Gagne led every practice session and both qualifying sessions, then went out and led all three starts on Saturday. In other words, no one ever led him. Oh, yeah, don’t tell him but he’s also now climbed to within 16 points of championship leader Danilo Petrucci.

Gagne’s victory at Ridge was the 21st of his Superbike career and it was typical Gagne. Get the holeshot, pull a gap and maintain said gap to the finish.

After a final portion of the race that lasted just eight laps, Gagne crossed the finish line 3.935 seconds ahead of his teammate Cameron Petersen, the South African earning his fifth podium of the year and keeping Gagne honest for the duration.

Warhorse HSBK Racing Ducati NYC’s Petrucci ended up third, the Italian benefitting from the second red flag as he crashed in turn one just moments after Jake Lewis’ crash in the last corner brought a premature stop to the race. Petrucci was able to get his bike back to pit lane where his crew replaced a broken left footpeg. Petrucci was a bit more cautious on the third start and it took him longer to get to third place. Once there, he settled in and brought the Panigale V4 R home for his seventh podium finish of the season.

Petrucci’s fourth-place finish allowed him to extend his lead in the championship over Mathew Scholtz to 10 points with the South African finishing fourth on Saturday.

Tytlers Cycle Racing’s Hector Barbera was less than a second behind Scholtz and some four seconds ahead of Aftercare Hayes Scheibe Racing’s Ashton Yates.

Vision Wheel M4 ECSTAR Suzuki’s Richie Escalante was given second life after highsiding out of the first portion of the race and making the restart. He battled on to finish 10th on the day.

It was a race of fairly high attrition with Tytlers Cycle Racing’s PJ Jacobsen and Vision Wheel M4 ECSTAR Suzuki’s Jake Lewis among those crashing out of the race.

With nine races in the books, Petrucci leads Scholtz in the title chase by 10 points, 156-146. Gagne is third with 140 points, 17 more than his teammate Petersen. Barbera rounds out the top five in the championship with 90 points.

“My first start was awesome. I see a red flag and I’m like, ‘oh, man.’ Then the second start again was pretty awesome and I’m like, ‘oh, man. I got to do it one more time.’ It’s not a long run to turn one here, so if you get a good jump, it’s hard for anybody to dive in there. I think everybody was a little frustrated to see two red flags first lap, first lap. It’s like, let’s just get this race rolling. It was shortened, too. But no matter what, I think these Yamahas are obviously really, really working good here. This is kind of one of those Yamaha tracks. It always works well. I’m happy. There’s been a couple little things that we’ve struggled with all year, and then I think we finally figured out some big steps at Road America. Then to bring the bike here, the bike is really, really good. Hats off to the team. Hopefully, we can get a full 18 (laps) in tomorrow. Everybody is going to step it up for sure tomorrow. So, I think we’re in for some good racing. Good racing all year. I’m enjoying it.”

“I’m super happy. Obviously, yesterday, I felt pretty good and then this morning just everybody kind of upped their game. I started panicking just a little bit, especially with how much faster Jake (Gagne) was than me. But who knows? Who knows what Jake’s doing? After all the restarts and the tires and stuff, once he settled into his rhythm there was just no way I could keep up with him. I felt good. Just for the first two or three laps I was able to kind of at least latch on a little bit and see what he was doing. I think it helped me out big time just to kind of create a gap to some of the guys behind me. It was just a nice, comfortable race. Easy to get into my rhythm, ride my own thing. I had one mistake up in 11 that was just a brain fart. I just completely missed my brake mark and ran wide in turn 13. But other than that, everything is super good. I’m so happy. Every single weekend we’re chipping away at it. We’re learning. I’m super happy to get another podium. It’s another one-two for the Yamaha boys. That’s what we need. That’s what the team is looking for. I’m just going to keep building off of this, keep having fun with the guys, having fun with the team. Congrats to Jake on another unreal race. Congrats to Danilo (Petrucci) on another podium. Looking forward to having fun tomorrow.”

“I’m happy because we had a lot of troubles this weekend. We completely destroyed one engine at the end of FP1. We missed most of FP2. For me, this is a new track and it’s quite difficult to learn. Then we had to find also a setup. Overall, I’m happy because the Yamaha guys today were on another planet. I was feeling good in the second restart, also in the first, but the second restart I was feeling good. I was at the end of the first lap catching them, but I crashed out in this corner (turn one) so maybe I was too optimistic. I was lucky then because there was a red flag. Then, anyway, I tried to manage because in the race I had massive chattering. I just thought to stay up and finish the race.”

Wyman vs. Wyman On “The Big Game” 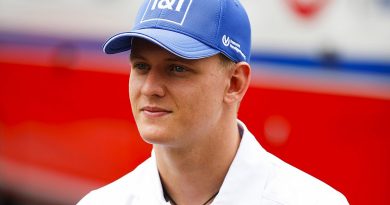