Drag Specialties is posting $52,000 in contingency for the 2022 MotoAmerica Mission King Of The Baggers Series.
Photo by Brian J. Nelson

MotoAmerica, North America’s premier motorcycle road racing series, is thrilled to announce that Drag Specialties has signed a new three-year agreement to be an official partner of the Mission King Of The Baggers Championship. Additionally, Drag Specialties will also be offering a contingency program for the popular V-twin class.

Additionally, Drag Specialties will pay $10,000 to the racer who is ultimately crowned as champion of the MotoAmerica King Of The Baggers Championship.

“We are excited to sign a new multi-year sponsorship agreement with MotoAmerica,” said Hylton Beattie, Global Motorsports Director for Drag Specialties. “Our partnership has been successful for both parties so we’re happy to continue for at least three more years.  We are also pleased to offer a contingency program to racers in the MotoAmerica Mission King Of The Baggers Championship. The Baggers series fits right into a lot of what we do at Drag Specialties, we’ve seen the rapid growth of the new series, and we want to be a bigger part of it. It’s always our goal to give back to our customers and offering a contingency program to our racers is a perfect way to accomplish this. We’re looking forward to a close and exciting battle for the championship and we will have our semi at the tracks so we can interact with our customers. It will be a lot of fun to watch and we can’t wait for it to get started at Daytona.”

“We’re really happy that Having Drag Specialties is returning as a sponsor of the Mission King Of The Baggers Series,” said MotoAmerica President Wayne Rainey. “And the fact that Drag Specialties is taking it a step farther and offering a contingency program to our racers is a real bonus and really shows their continued commitment to our series.”

The contingency payout requirements are as follows: Logos must be unobstructed, visible, and applied at all rounds; an authorized Drag Specialties patch is to be worn on either upper sleeve or front upper chest of the riders’ leathers; and three-inch Drag Specialties decals must be present on either of the bikes side panels or tail section.

2022 MotoAmerica King Of The Baggers Championship

*Two races will be held at Daytona 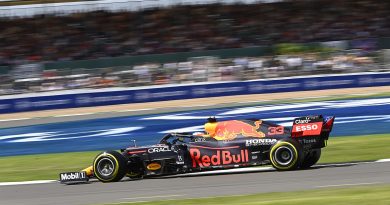 Verstappen hampered by “weird feeling” with F1 car in qualifying