Corey Alexander and the HONOS HVMC Racing team are honored to unveil their FDNY Engine 23-inspired livery for this weekend’s MotoAmerica races at New Jersey Motorsports Park, which coincide with the 20th anniversary of the September 11th attacks.

The team’s Graves-spec Kawasaki ZX-10RR “Engine 23” will be raced in the Stock 1000cc and HONOS Superbike classes throughout the weekend as a tribute to first responders past and present, as well as to honor victims of the attacks and their families.

The entire Alexander family is born and raised in New York and the team’s title sponsor, Hudson Valley Motorcycles, is located just 30 miles north of where the World Trade Center’s twin towers once stood.

“As a New Yorker, 9/11 is a really meaningful day on the calendar each year for me,” Alexander said. “When I realized this year’s race fell on the 20th anniversary, I knew I wanted to pay tribute again just as we did in 2016. It was a lot of work the past two weeks to make it happen, but we are here and I can’t wait to show the bike off around the track this weekend. I hope everyone loves it as much as I do.”

Corey and the HONOS HVMC team have partnered with Honor365® and Maxima Racing Oils to produce 300 limited edition t-shirts with a special FDNY-inspired design. The tees will be available for a $30 donation while supplies last and can be found at the team’s hospitality area in NJMP’s paddock.

Tickets to the event are available at New Jersey Motorsports Park or online via MotoAmerica.com.

About Honor365®
Honor365® was founded on March 31, 2017 with the mission of providing resource and referral services to veterans, first responders, and their families. As a result, six programs were developed in order to support those who support us 24/7. Visit Honor365.org for more information or to donate. 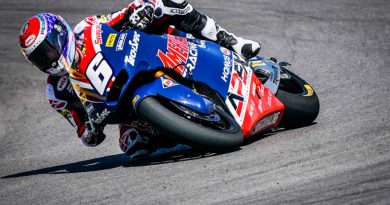