Ben Bostrom will be racing the Feuling Harley-Davidson in the Mission King Of The Baggers race at WeatherTech Raceway Laguna Seca next weekend. Photo courtesy of Feuling Parts.

You can count on one finger the number of riders who have raced a Honda MotoGP bike and a King Of The Baggers Harley-Davidson around WeatherTech Raceway Laguna Seca. That one rider is Ben Bostrom.

Simply put, Bostrom and WeatherTech Raceway Laguna Seca go together like fine wine and cheese. From winning both races in the World Superbike event at Laguna in 2001 to winning a Supersport race there in 2008 to racing an LCR Honda in the MotoGP event there in 2011, to racing in the inaugural MotoAmerica King Of The Baggers Invitational there last year, Bostrom and Laguna have been good to each other.

And he’s coming back for more.

Bostrom has been confirmed as an entry in the third and final round of the 2021 MotoAmerica Mission King Of The Baggers Championship next weekend at WeatherTech Raceway Laguna Seca where he will throw his leg over the Feuling “Flying Pig,” the code name for the Harley-Davidson Road Glide built by the crew at Feuling Parts.

“I hadn’t been there in a long time, and we did the Baggers there last year,” Bostrom said. “Even just riding a stock bike around the place… I just enjoy it. In the past, in my younger days, there’s no way I would have ridden a stock bike and been happy, but this thing is just fun to ride around a track. It’s a little bit like memory lane.”

So, what is it that Bostrom likes so much about Laguna Seca?

“Honestly, I think it’s because it’s kinda NorCal, and it feels like home when I’m up there,” Bostrom said. “It’s kinda cold, gets hot and the track is kind of blind. It’s an epic little track, and I really like it. I don’t have any more laps than anyone else there, but I like the place. It’s blind, you can’t see, and it has a slippery surface, and you slide around a lot and it’s tricky to set up the bike. Before they wrecked it, it was really cool because it was like a rollercoaster going into the Corkscrew. You could set people up for some crazy passes. For safety reasons, they changed the entrance there so everyone goes in kinda fast and you can see where you’re going. When it was a rollercoaster, you couldn’t see, and you went in there blind – flat out over that hill. Every lap was exciting. There are good fans, good energy there.

“The biggest ‘win’ to me, at Laguna, was my wild card entry (in World Superbike) in 1998 when Honda let us ride,” Bostrom said. “We were racing for second and they cancelled the race because there was a big crash, but I was like, ‘What am I doing racing with King Carl (Fogarty)? I don’t deserve to be up here.’ There was a big crash and Aaron (Slight) had another epic crash off the start and they cancelled race one. In race two, we put the thing on the box. I will never forget this because Merlyn (Plumlee, his crew chief) came up to me and said, ‘Master, you have arrived.’ I was like, ‘Merlyn, I don’t know what we’re doing up here on the podium.’ But the lap times were there, and it was good. That felt like a win, more than any win I ever had there. That was legit… maybe because I was on the podium on my first go.”

Bostrom will be hoping to get the Feuling Harley on the podium again at WeatherTech Raceway, July 9-11, as one of 16 riders racing highly modified V-twin Baggers around the iconic 2.238-mile racetrack on the Monterey Peninsula. 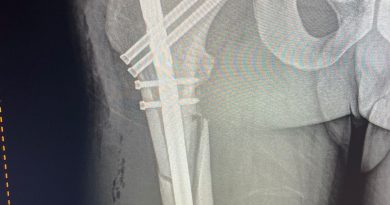 Down, But Not Out: Superbike Rider Bradley Ward Vows To Race On After New Jersey Setback 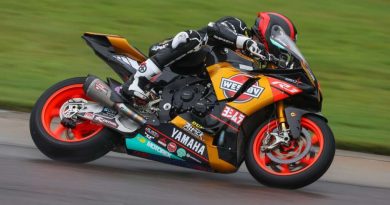 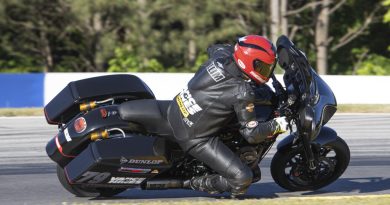