American Racing’s Cameron Beaubier had a solid opening day to the 2021 Moto2 World Championship on Friday in Qatar with the five-time MotoAmerica Superbike Champion leading the trio of Americans in FP1 and FP2 and ending the day ninth fastest. Italtrans Racing’s Joe Roberts, meanwhile, the Moto2 lap record holder at the Losail International circuit, completed day one in 17th with Beaubier’s rookie teammate Sean Dylan Kelly 26th in his Losail debut.

Beaubier ended FP1 in 11th but improved in FP2 to slot himself into the top 10 with the ninth best lap of 1:59.705 coming near the end of the second session and placing him just .593 from the top spot.

Meanwhile, Roberts was 15th in the first free practice session, improved his lap time to 2:00.271 in the second session but slid back to spots to end the day 17th.

Rookie Kelly, in his first day as an official Moto2 racer, sliced almost three seconds from his lap times in FP1 in FP2 with his 2:01.348 moving him from 30th to 26th at the end of the day. The evening session was led by Red Bull KTM Ajo’s Adrian Fernandez with the Spaniard lapping at a best of 1:59.112 to lead his teammate Pedro Acosta, with the non-defending Moto3 World Champion just .160 of a second behind Fernandez. Liqui Moly Intact GP’s Marcel Schrotter ended up third fastest. 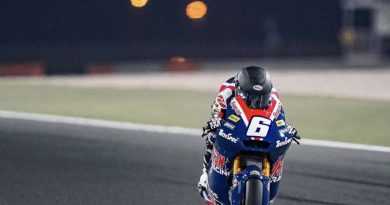 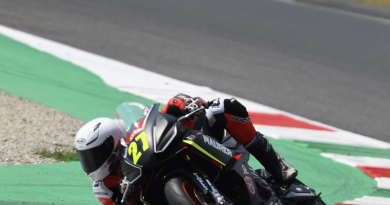 Toth Does It To The Max, Doubles At Mugello