With the news that MotoAmerica is headed to Daytona International Speedway in March of 2022 for the Daytona 200, we decided the perfect way to build excitement for the event would be to start digging through the history books and memory banks. Since Paul Carruthers is literally as old as the Speedway itself and covered almost 30 Daytona 200s as a journalist while working at Cycle News, it was a no-brainer that it would be him who would take on the task of trying to recall the good and the bad. And since we are the home of the AMA Superbike Series, we figured we’d have him start his look back with the 1985 Daytona 200 – the first of the 200s to feature Superbikes – and go from there. This week, we focus on the 1988, 1989 and 1990 Daytona 200s.

After crashing out of the lead in the 1987 Daytona 200, Kevin Schwantz made amends in 1988 as he ran away to an easy victory in the biggest race of his life at the time. The win was not only the Texan’s first in the 200, it also marked the first Daytona 200 win for Suzuki as Schwantz rode a Yoshimura Suzuki GSX-R750 to victory.

The Turning Point: By the 10th lap, the leaders were already in heavy traffic and Schwantz handled it the best, breaking the draft to lead Doug Polen by some two seconds. On the 19th lap, Schwantz had a 10-second stop for gas and lost the lead to Polen. But it was temporary as he gained the lead back with a larger gap a lap later when Polen pitted, and the crew had issues with a tire change. That gave Schwantz a 24-second lead and it would become larger, even though he stayed with his original Michelin tire until the second pit stop. From there it was clear sailing for Schwantz has he celebrated victory with wheelies and still beat Polen by three-quarters of a lap.

Newsworthy: Daytona’s Victory Lane looked like the Lone Star State as riders from the state of Texas finished one-two-three in the 200 as Schwantz beat his teammate Doug Polen with Honda’s Bubba Shobert finishing third.

Schwantz earned pole position for the Daytona 200 with his lap of 1:55.11 in the final session.

Shobert’s Honda vapor locked on the warm-up lap, and he was over a minute and a half behind the field when he got the bike refired and running but he managed to storm through to a third-place finish.

With inclement weather wreaking havoc on the schedule, the five-lap Camel Challenge was rescheduled as the first five laps of the Daytona 200. Since it was Polen out front on the fifth lap, he was the winner of the Camel Challenge and the $10,000 that came with the victory.

“It’s a good feeling to win Daytona,” Schwantz said. “It was close in the beginning, but everything went really smooth. I picked a tire that would go the distance.

John Ashmead became the first privateer to win the Daytona 200 since the late Dale Singleton won the race in 1981 when he captured victory in 1989 on his three-year-old Honda VFR750.

The Turning Point: Ashmead survived a race of attrition as the race featured seven different leaders on four different brands of motorcycles. Ashmead inherited the lead when Yoshimura Suzuki’s Jamie James, who looked to have victory in his grasp, made an unscheduled pit stop with just a few laps left in the race. Not even Ashmead thought he’d won. “I thought I was in second,” Ashmead said shortly after winning the race. “I saw my number on top of the scoreboard and I thought they must have made a mistake.”

Newsworthy: Jamie James was able to finish second, despite a late-race pitstop, with Kevin Rentzell finishing third on a Supersport-spec Suzuki GSX-R750 that was rebuilt to Superbike specs the day before the race.

Pre-race favorites Doug Polen and Scott Russell both had issues in the 200. Russell was involved in a startline collision, and Polen retired while leading with mechanical problems.

Ashmead (center) is joined by Kevin Rentzell and Jamie James in Victory Lane.

A pace car – a red Pontiac Grand Prix driven by AMA/CCS Director Roger Edmondson – was used for the first time ever in the 200 as it set the pace in laps six through 11 while fluids were removed from the track surface at the entrance to the chicane.

James pitted on lap 55 of the 57-lap race while in the lead. “I didn’t know whether to come in for fuel or just keep going,” James said. “It seemed like it was running out of gas, or the battery was dying.”

Despite being involved in a first-turn melee that took out two of the top five qualifiers, David Sadowski and his Vance & Hines Yamaha managed to edge the Commonwealth Honda RC30 of Randy Renfrow to win what was at the time the closest Daytona 200 in history.

David Sadowski survived an off-track excursion to win the 200 in 1990.

The Turning Point: With Scot Niall Mackenzie and Jamie James both crashing in the first corner on the opening and Sadowski taking to the grass, it was Sadowski’s teammate Thomas Stevens taking over at the top and a pace car emerging for the first of its three trips to the track during the 200 miles. Stevens’ Yamaha would develop mechanical problems and even a flat rear tire, all of which would drop him to an eventual 13th-place finish. Jamie Whitham would then emerge as Sadowski’s main threat, but the Brit would crash in the chicane. It came down to a two-rider race for victory with Sadowski leading Renfrow out of the chicane for the final time and holding off the drafting Virginian by .64 of a second.

Newsworthy: The 1990 edition of the Daytona 200 saw somewhat of a revival in the field with 74 riders starting the race under new rules. That equated to the pointy end of the field being armed with exotic and now legal Yamaha OW01s, Honda RC30s, Kawasaki ZX7s, Suzuki GSX-R750s and the Ducati 851.

The two Vance & Hines Yamahas were clocked at 175 mph through the speed traps with James’ Ducati 851 just slightly slower. Doug Chandler’s Kawasaki, however, was nearly 10 mph slower than the two Yamahas.

Vance & Hines’ Thomas Stevens earned pole position for the Daytona 200 (and the Rolex watch that went with it) with his lap of 1:54.561 for an average speed of 111.871 mph. Sadowski, James and Niall Mackenzie completed the front row.

Three of the four front row men used Dunlop tires. The exception was Jamie James who used Yokohama slicks in qualifying but would switch to Michelins for the 200 after encountering wear problems with the Yokohamas.

Quote of the week went to Mackenzie. “There’s two turns where you come off the banking – turn one and the chicane – and I keep getting them mixed up. I went straight at turn one once. My lap time was real good then (after skipping the infield), my mechanic about had an orgasm.” 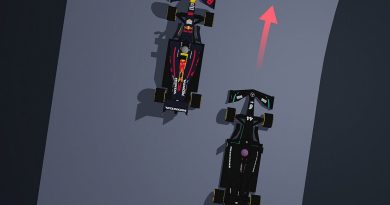 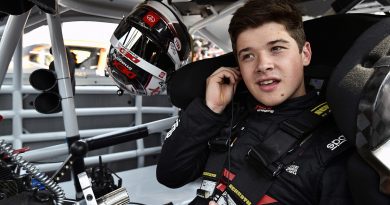 Harrison Burton steps up to Cup: “I’ve worked for this my whole life”