With the news that MotoAmerica is headed to Daytona International Speedway in March of 2022 for the Daytona 200, we decided the perfect way to build excitement for the event would be to start digging through the history books and memory banks. Since Paul Carruthers is literally as old as the Speedway itself and covered almost 30 Daytona 200s as a journalist while working at Cycle News, it was a no-brainer that it would be him who would take on the task of trying to recall the good and the bad. And since we are the home of the AMA Superbike Series, we figured we’d have him start his look back with the 1985 Daytona 200 – the first of the 200s to feature Superbikes – and go from there. This week, we focus on the 2012 and 2013 Daytona 200s.

Youth was most definitely served in the 2012 Daytona 200 as 19-year-old Joey Pascarella beat veteran Jason DiSalvo by just .048 of a second in the 71st running of the race. Pascarella became the second-youngest racer to win a Daytona 200 and the youngest 200 winner at Daytona International Speedway. Brad Andres won the 200 at the age of 18 at the beach course in 1955 and Josh Herrin was two and a half months shy of his 20th birthday when he won the 200 in 2010. Pascarella was six months shy of 20 when he took victory on his Project One Atlanta Yamaha YZF-R6.

Pascarella was six months shy of 20 when he took victory, making him the youngest winner of the Daytona 200 since the race moved to Daytona International Speedway. Photo by Brian J. Nelson

The Turning Point: DiSalvo was forced to fight back to the lead pack after making an unscheduled pit stop on the 14th lap. The New Yorker heard funny noises coming from his Triumph and opted to pit in the name of safety, losing some 40 seconds in the process. On the 32nd lap, he was 17.2 seconds behind. On the 43rd lap, that gap had come down to 13.2 seconds and then it really started to drop. With seven laps to go, DiSalvo was 7.7 seconds behind and on the 55th of 57 laps he had the gap down to under a second. It all came down to the final lap and he came up just short at the finish line.

Newsworthy: With Pascarella beating DiSalvo by just .048 of a second, the race for third was a virtual tie between Y.E.S. Graves Racing Yamaha’s Cameron Beaubier and GEICO Suzuki’s Martin Cardenas – the pair just .112 of a second behind Pascarella. The photo finish showed that Beaubier had earned the final spot in Victory Lane.

The 71st running of the Daytona 200 went off without a hitch. No tire woes, no pace cars and no controversy.

Just four years removed from when he competed in the the Red Bull U.S. Rookies Cup, Pascarella led 41 of the 57 laps and his team performed perfect pit stops. “The hardest race ever,” Pascarella said from Victory Lane. “There was always somebody there every time I looked back. I have to give it up to my crew. It’s phenomenal, dude. They gave me the equipment to do this. I’m really thankful to be out there. I definitely thought I could do it. I just didn’t let it get to me after qualifying and I just rode my own race and stayed out front. That’s where I was most comfortable.”

Jason DiSalvo’s Latus Racing Triumph was decked out in Gary Nixon livery to honor the late AMA Grand National Champion who also raced Triumphs in the 200.

Cameron Beaubier flies under the checkered flag to win the 2013 Daytona 200. Photo by Brian J. Nelson

Twenty-year-old Cameron Beaubier was already being touted as a future World Championship contender in 2012 when he won the 72nd edition of the Daytona 200 in dominating fashion, the Northern Californian beating his 17-year-old Y.E.S. Graves Yamaha teammate Garrett Gerloff by over 22 seconds.

The Turning Point: Although the Daytona draft would keep the lead pack close in the early laps, when Beaubier decided to hit the go button this one was for all practical purposes over. At the end of the 200 miles, Beaubier was 22.5 seconds clear of Gerloff, with the Texan turning in an immaculate race in what was his first-ever Daytona 200.

Twenty-year-old Cameron Beaubier beat his even younger teammate Garrett Gerloff by 22 seconds to win the Daytona 200.

Newsworthy: Beaubier earned pole position for the Daytona 200 with a lap of 1:49.612 on the 3.61-mile road course. Beaubier set the pace from the beginning of Bike Week, and it was clear that he was the rider to beat. In fact, no one got within a second of his best lap with his teammate Gerloff coming the closest – 1.49 seconds slower than Beaubier.

With Beaubier beating Gerloff and Motorsports/Triple Crown RMR Yamaha’s Bobby Fong in the Daytona 200, the average age of the three riders in Victory Lane was just 20 years old.

Fourth and fifth went to two more youngsters – RoadRace Factory’s Jake Gagne and JD Beach. Gagne ended up turning the fastest lap of the 200 en route to his fourth-place finish – a 1:50.087.

Elena Myers made history when she became the first woman to finish in the top 10 in a Daytona 200. She ended up ninth after battling with Melissa Paris for the honor of top female honors. Paris’ run at history was thwarted as she was forced to do a stop-and-go penalty when her crew was deemed by race officials as having too many people over the wall during a pit stop.

The first non-Yamaha to cross the line was in the capable hands of last-minute replacement rider Steve Rapp, who rode the GEICO Honda in place of the injured Dane Westby to a sixth-place finish.

Monster Energy Graves Yamaha’s Josh Herrin and Yoshimura Suzuki’s Martin Cardenas split wins in the two AMA Superbike races at Daytona. Herrin’s win on Friday was his first-ever AMA Superbike victory. Pre-race favorite Josh Hayes fried his clutch off the start of race one and his Yamaha YZF-R1 blew up in Saturday’s race. 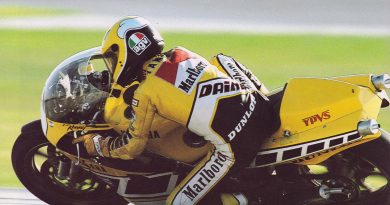 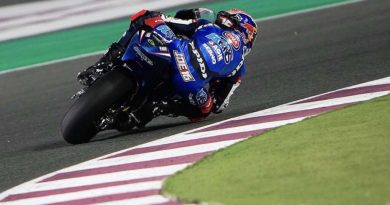 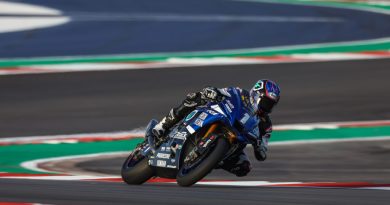