With the news that MotoAmerica is headed to Daytona International Speedway in March of 2022 for the Daytona 200, we decided the perfect way to build excitement for the event would be to start digging through the history books and memory banks. Since Paul Carruthers is literally as old as the Speedway itself and covered almost 30 Daytona 200s as a journalist while working at Cycle News, it was a no-brainer that it would be him who would take on the task of trying to recall the good and the bad. And since we are the home of the AMA Superbike Series, we figured we’d have him start his look back with the 1985 Daytona 200 – the first of the 200s to feature Superbikes – and go from there. This week, we focus on the 2010 and 2011 Daytona 200s.

Yamaha’s Josh Herrin won the 69th running of the Daytona 200 and he deserved it. In 2008, Herrin had lost the Supersport race to Ben Bostrom by .012 of a second. A year later, he lost the 200 to the same Bostrom by .554 of a second. The win finally came in 2010, but it was by no means an easy week. It started with a crash in the chicane during qualifying that left him with an injured right shoulder, and it got worse later that day when he was knocked off his pit bike by a fireman in a golf car and he landed on the same shoulder. But none of that stopped him.

“I really wanted to come in and win just because three years in a row I’ve gotten shut down right at the last second,” Herrin said. “I knew it was up to me to try and get a win for them (Yamaha) here. I know it’s really important to them. I think they’re really happy with it.”

The Turning Point: Project I Atlanta’s Dane Westby was giving Herrin the most trouble and was in the hunt for victory until the 39th lap. At that point, the top four riders pitted for the final time and the Graves Yamaha crew got Herrin back on track quicker than Westby by more than two seconds. That turned out to be the difference. Westby kept the gap to under three seconds until the final seven laps when Herrin would stretch it out to win by 7.9 seconds.

Newsworthy: With Dane Westby finishing second to Herrin, third place went to Latus Racing Ducati’s Steve Rapp after the former Daytona 200 winner managed to pull away from GEICO Powersports RMR Suzuki’s Danny Eslick in the latter stages of the race. Eslick held on to finish fourth and was the last rider on the lead lap.

One year after one of the most chaotic Daytona 200s, the 2010 version was clean with no race stoppages and no controversy.

Jake Zemke gave basketball legend Michael Jordan his first-ever win in the AMA Superbike class and he followed that with a second win for the Suzuki team in the season-opening Superbike doubleheader at Daytona.

The Supersport class, which had changed from what it was to a class for up-and-coming racers, was a sign of things to come with future five-time MotoAmerica Superbike Champion Cameron Beaubier beating Joey Pascarella and 2021 MotoAmerica Superbike winner Jake Gagne in race one. In race two, it was Pascarella taking the victory over Gagne, Tomas Puerta and Beaubier.

After a day that could only be described as bizarre, Latus Motors’ Jason DiSalvo gave Ducati its first and thus far only victory in the Daytona 200 when he won the 70th edition of the race in 2011. But, as many would argue, the race could easily have ended with an asterisk next to DiSalvo’s name for a few reasons. For starters, the 200 only went 147 miles, and it took two motors to get DiSalvo to the finish line.

The Turning Point: On the 27th lap, a red flag was thrown after a few riders had experienced front tire troubles and the AMA opted to stop the proceedings to mandate a front-tire change to the medium-compound Dunlop. After a lengthy delay, the race would be restarted as a 15-lap sprint race – thus the 147 miles. By the time the red flag was thrown, DiSalvo was in the pits with his Ducati 848 Evo having dropped a cylinder. He was out of the race. Or was he? With the delay a lengthy one, his Latus Racing crew changed motors and he was suddenly back in business. DiSalvo raced away from his spot on the front row on the restart and diced with the lead pack. But wait, there’s more.

Jason DiSalvo celebrates in Victory Lane after riding his Latus Motors Ducati to victory in 2011.

On the 37th lap, DiSalvo slowed in the International Horseshoe with what he thought was a bad front tire. When he realized all was okay, he got back up front in a hurry, rejoined the lead pack and battled to the flag. But on the run to the flag, all hell broke loose with Monster Energy Graves Yamaha’s Josh Herrin colliding with M4 Suzuki’s Dane Westby, the Oklahoman’s front brake locking and putting him in a 170-mph stoppie. With Westby crashing, Taylor Knapp had nowhere to go, and he also went down, the two coming to a stop on the grass that a week earlier had been the site of the AMA Supercross.

With all that going on behind him, DiSalvo crossed the finish line in front of Cory West and Jake Zemke as the red flag came out. As DiSalvo did his celebration lap, the AMA reverted its scoring to the previous lap, and brought Herrin, Cycle World/Attack Kawasaki’s JD Beach and Zemke into Victory Lane as the top three. Then they changed their mind and kicked Beach out and brought in DiSalvo, West and Zemke after deciding that the top six had already crossed the finish line prior to the red flag. The top six would be scored on the 42nd lap, with the rest of the field being based on lap 41. And then the head scratching began.

Early in the race, GEICO Powersports RMR Suzuki’s Danny Eslick looked to be the rider to beat but he crashed on the 26th lap at 160 mph when his front tire failed. Eslick wasn’t alone with front-tire woes and the race was stopped two laps later. After deliberation that lasted two and a half hours, it was decided that the remainder of the race would be just 15 laps.

Rockstar Makita Suzuki’s Blake Young won both AMA Superbike sprint races that were held as support races for the Daytona 200. Young beat his teammate Tommy Hayden in race one with Monster Energy Graves Yamaha’s Josh Hayes finishing third. In race two it was Young on top again with Hayes and Hayden swapping places from race one. 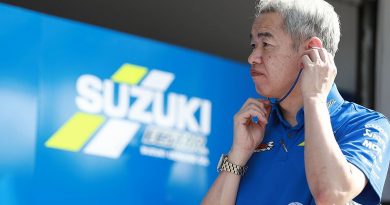 Suzuki “will be more united than ever” after Brivio exit 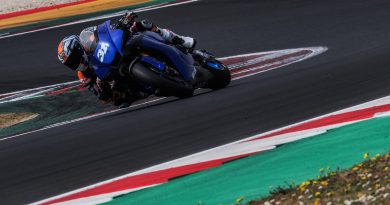 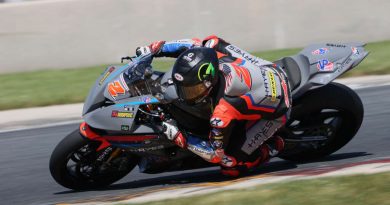