Anytime you have a hit on your hands the way Royal Enfield does with its Himalayan adventure bike, you capitalize on it. A few modifications here, a tweak there, and voila, a new variation is born. Many times, however, as with blockbuster movies, sequels fail to capture the success of the original. With the Scram 411, has Royal Enfield produced the two-wheeled equivalent of a follow-up hit like The Empire Strikes Back or a forgettable flop like Ghostbusters II?

The new scrambler-style Scram 411 and the Himalayan share the same frame and air-cooled 411cc Single with SOHC and two valves. The 4-gallon fuel tank is also the same, but the Himalayan’s two-piece seat has been swapped for one of a singular design. More importantly, the 21-inch front wheel of the Himalayan was replaced with a more street friendly 19-incher on the Scram.

The instrument cluster was also downsized, with the Himalayan’s digital compass and tachometer being omitted on the Scram, while the speedo was replaced with a different version that includes a clock, dual tripmeters, an odometer, and a gear-position indicator. Our test bikes were outfitted with Royal Enfield’s Tripper navigation unit, but according to company reps, supply-chain issues have prevented the Tripper from being offered as standard equipment. Instead, it will be an accessory available sometime in the future.

Gone as well are the Himalayan’s windscreen and front rack, forcing Enfield designers to clean up the bike’s exposed cockpit, which they did by way of a cast metal headlight nacelle. Affixed to the mounting points on the frame where the front rack was previously attached is a pair of “urban badge plates.” Kudos to Enfield for taking the time to cover an ugly mounting stalk that another OEM may have left exposed and then incorporating that element into the bike’s graphics.

The Scram 411 is available in seven different graphics packages, all starting at $5,099.

Our route through the dairy lands of Wisconsin presented enough greenery and full lakes to make a California resident like me loathe returning to our brown, drought-stricken state. What it didn’t provide was a roadway tight enough to push the Scram to its limits in a series of peg-grinding, left-to-right transitions. But in the Badger State’s plentiful sweepers, gently rounded corners, and straightaways, the Scram exhibited all the confidence a bike of its caliber should.

The semi-knobby tires do a fine job generating good grip and control in on- or off-road conditions while looking the part of a scrambler. The handlebars are just the right width to provide the rider with comfortable control. But the reach to the levers was at the limit of my comfort level, and while you can fiddle with the clutch cable to bring the clutch lever closer to the bar, the brake lever would require replacement with something more ergonomic.

The few short gravel roads we traveled were also navigated with nonchalance except for the non-switchable rear ABS, which the Himalayan has but the Scram does not. Standing on the balls of my feet, I felt the same pressure from the side covers pushing my calves outward as I experienced with the Himalayan. Moving my feet forward until the heel of my boot caught the footpeg helped relieve the pressure, but I’d rather my feet be better positioned.

Over the course of 400 miles, I found the seating position of the Scram to be surprisingly agreeable for a small-displacement motorcycle. The reach to the handlebar felt natural, and the seat provided a good combination of comfort and support. The seat-to-footpeg ratio was spacious enough to keep my knees from aching at the end of two full days of riding.

At 7.5 inches, the Scram’s nonadjustable fork has 0.4 inch less travel than the Himalayan. Whether it’s the reduced travel or different damping, the Scram responded more harshly to rough pavement than its stablemate. The preload-adjustable rear shock, on the other hand, was less affected by irregularities.

The Scram 411 variant of the Himalayan is an obvious direction in which to expand Royal Enfield’s model lineup. However, whereas the Himalayan succeeds well in its intended off-road environment, the Scram struggles to shine as brightly on pavement. In the dirt, the 411cc Single’s claimed 24.3 hp is enough for a novice or experienced motorcyclist to have fun, but on the road there’s barely enough forward thrust to keep a 5-foot-11, 187-lb rider like me moving at freeway speeds. At full tuck on a flat road, I got to 75 mph molasses-quick, but even at 65 mph there’s hardly any passing power in reserve.

On the other hand, the counterbalanced Single produces hardly any vibration. Regardless of engine rpm, the air-cooled engine remained eerily smooth. The 5-speed transmission was uncooperative at times, exhibiting occasional notchiness when downshifting multiple gears, but the clutch pull is light.

The Scram’s brakes are adequate but uninspiring. On the Himalayan, the single-disc brakes front and rear sufficiently slow the motorcycle in the dirt. On the street, however, effort is required to extract full power from the front 300mm disc gripped by a 2-piston caliper and the rear 240mm disc with a single-piston caliper.

Has Royal Enfield got a sophomore hit on its hands? Accepted on its own terms – clean retro styling, a modestly powered little-engine-that-could Single, a solidly built price-point chassis, and an entry-level price – the answer is a qualified yes. Part of the deal is a low-tech motorcycle that’s heavy for its displacement class (432 lb with its 4-gallon tank full), which will be appealing, irrelevant, or unappealing depending on your point of view.

In the small-displacement scrambler segment, there aren’t many options available, but the Scram 411 isn’t the only game in town. For an extra $300, there’s the more modern, more powerful, and lighter Husqvarna Svartpilen 401. Different strokes for different folks. 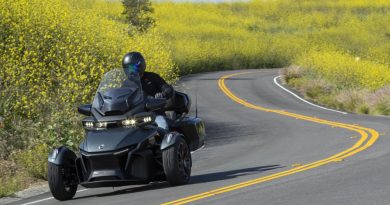 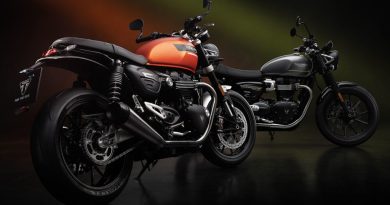 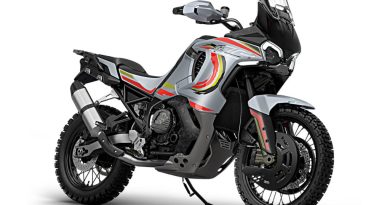