Sporting many of the familiar features that riders love, as well as upgrades that will take the experience up a notch, the updated-for-2023 KTM 450 SMR proves it’s still a serious player in the supermoto game. When tenths of a second and tens of centimeters make the difference in lap times or an overtaking move, the track-only 2023 KTM 450 SMR is exactly what any supermoto racer needs. Pricing for the 2022 model starts at $11,999, so expect a small bump in MSRP for 2023.

The 450 SMR’s revised shock mount is said to enhance energy absorption and straight-line stability, and its “anti squat” design should translate to better acceleration and stronger corner exits. Redesigned high-grade aluminum CNC-machined triple clamps have increased grip surface for less handlebar “twist,” which should contribute to better control and feedback.

The SMR’s central double-cradle-type chromoly steel frame is still hydro-formed, laser-cut, and robot-welded, but KTM has altered longitudinal and torsional flex as well as frame-wall thickness to improve feedback. The new 22mm rear axle and latest generation of WP XACT suspension are said to improve traction and energy absorption for sliding into turns.

The fully adjustable AER 48mm front fork with 11.2 inches of travel still has a split-damping function and simple toolless adjusters, among other advantages. Out back, the 2023 model features a shorter, lighter (but still with the same 10.5 inches of travel) WP XACT shock, which has revised internals to improve damping behavior.

Replacing the Bridgestone slicks are Metzeler Racetec SM K1s, which promise rapid warm-up times and consistency in grip lap after lap. The 450 SMR rolls on Alpina tubeless spoked wheels, with a 16-inch front and a 17-inch rear.

The 499.9cc liquid-cooled, SOHC Single, which still blasts out a claimed 63 hp, has been revised to improve mass centralization and reduce weight – at 59.5 lbs, it’s nearly a pound lighter than the previous version. The engine has been tilted back, the cylinders have new internals, the crankshaft has been optimized, and the countershaft sprocket has been lowered by 3mm. Pankl Racing Systems has supplied a redesigned 5-speed gearbox with new ratios.

Another feature is the new Quickshift sensor on the shift drum for clutchless upshifts, which can be disabled through the handlebar switch. The Keihin Engine Management System still administers the traction control, launch control, and quickshifter functions, and there are two customizable engine maps.

Throwing the whole package into place on-track is easier thanks to revised ergonomics and a sculpted rider triangle that permits an even better contact points between motorcycle and user. There’s also a new recessed grip pocket under the seat, and visually, the 1990s-derived splash of purple adds to the “Ready to Race” graphic vibe, along with the flat orange seat and white tailsection.

Where does the song remains the same?

KTM follows the old adage “If it ain’t broke, don’t fix it” with several aspects of the new 450 SMR. The polyamide-reinforced aluminum two-piece subframe is strong, light, and contributes to a sense of control from the saddle, as do the inward-located footpegs that are cleated to ensure reassuring grip under extreme riding conditions.

Premium components such as the Brembo M50 monoblock 4-piston front caliper with a 310mm rotor, a 220mm rear disc with a 1-piston caliper, a Suter slipper clutch with Brembo hydraulics, and a compact exhaust system ensure that the 450 SMR is ready to compete right out of the gate.

Full specs have not yet been released, but expect a slight reduction in weight from its predecessor (232 lbs) with the same 35-inch seat height and 1.85-gallon fuel capacity. 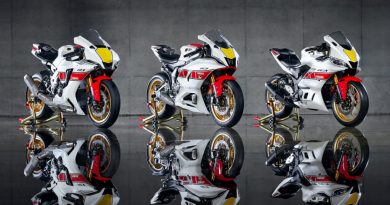 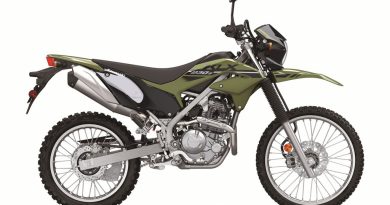 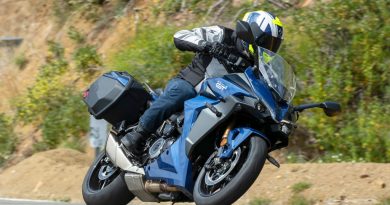