On November 10th, 1885, the Daimler Reitwagen became the fastest motorcycle in the world, kick starting what would become our homage to 20 Motorcycle Records of all Time.

Admittedly, the Daimler Reitwagen was, at that time, the only motorcycle in the world. Still, a record is a record.

Despite a fire starting under the seat due to overheating, Daimler’s son Paul wrung every drop of power from the 0.5-hp beast. Redlining the engine to 600-rpm, Daimler thrashed the wooden framed monster to set the record at 11-kph.

And with the setting of the first record, the race to go faster, further and crazier, began. From here there was no looking back. Unless, of course, you factor in Dave Coates, who in 2002 broke the world record for riding backward at 244.1-kph!

So let’s stand up and salute those mad, bad, and just plain crazy men and women who have dedicated their lives to pushing the proverbial envelope. Whether it’s extreme physical endurance or bending the laws of physics, these are our 20 Motorcycle Records of All Time.

Gary Rothwell retired from stunt riding shortly after his bike drag but just couldn’t stay away. Having previously set the record for the fastest wheelie, he was knocked off the top slot by Patrick (Ghost Rider) Furstenhoff.

Rothwell dusted off his Holeshot Racing 538bhp Suzuki Hayabusa and headed back to the track. Keeping his front wheel in the air for a kilometer, Rothwell re-set the record at 337.6-kph on September 15th 2015.

Fancy riding your bike across a 3-cm wide wire rope, 200-m above the ground? No, nor me, but that’s precisely what Moroccan high wire performer Mustafa Danguir (Mustafa Danger) set out to do on October 16th, 2010.

A 1.6-km long steel rope was suspended between the church of St James, Monte Tossal Hill, and the 43rd floor of the Gran Bali Hotel in Benidorm, Spain.  Danguir, who wasn’t wearing a safety harness, created the record on a Suzuki RM125. He did, though, get stuck a few meters away from the finish and have to be rescued!

3. Fastest Speed Dragged Behind a Motorcycle

On April 18th, 1999, at the Bruntingthorpe Proving Ground, Leicestershire, England Stunt Rider Gary Rothwell accelerated his Suzuki Hayabusa to a speed of 251.54-kph. No biggie, you may think, but it was at that speed when he climbed off the back of the bike and got towed along behind.

Holding on to the rear grab rail, Rothwell left a shower of sparks from the custom-made titanium soles fixed to his Spidi race boots. See video.

Ramp jumping made Evel Knievel (and his son Robbie) famous. Still, Aussie born Robbie ‘Maddo’ Maddison has taken it to a whole new level. On March 29th, 2008, in Melbourne, Australia, the freestyle Moto Crosser broke his own record not once but three times in one night.

In 2015, Robbie Maddison became the first-ever bike surfer when he tackled one of Tahiti’s most technical waves, ‘Teahupo’o’, on a modified KTM250 with skis. Switching bikes to a KTM450, he went on to break the record for the longest ride on water, at 31.8-km.

During that epic offshore stunt, he also clocked up the world’s fastest ride on water, too, at 93.3-kph. However, this record was later broken by Luca Columbo, who used an almost identically modified bike to Maddison’s to ride across Lake Como in Italy at 104-kph.

It may look like an overgrown vape-pen, but underneath the TOP-1 ACK ATTACK streamliner are two turbocharged Suzuki Hayabusa engines. Built by avionics engineer Mike Akatiff, the engines pump out a whopping 1000-bhp.

The heavily modified bike rocketed across Utah’s Bonneville Salt Flats at a staggering 605.697-kph on September 25th, 2010. The record to this day remains unbroken.

Piloting the 3000cc turbocharged V4 BUB 7 Streamliner over the Lake Gairdner Salt Flats in 2018 Thompson was still accelerating when the front end lifted. The BUB 7 skidded for over a mile. Still, Sturgis Motorcycle Hall of Fame member Valerie walked away to take the title as the world’s fastest female motorcycle racer and the fastest survived crash.

8. The Fastest Lap of the Isle of Man TT

The Isle of Man TT is the most dangerous motorcycle race in the world, with 200 corners over a 37.7-mile course. Riders complete six laps and reach speeds of 209-mph while passing inches away from stonewalls and railings along country roads.

Peter Hickman rode the fastest lap in 2018 on a BMW S1000RR. He averaged a mind-blowing lap-speed of 135.45-mph. I have had the incredible good fortune to ride this course on a BMW, which for me made the onboard footage of Hickman’s record lap even more beyond belief.

You may be thinking, Boss Hoss, but at a mere 483-kg, it’s a lightweight. What about the Harley-Davidson CVO Road Glide Ultra? Good guess, but at 437-kg, it barely tips the scales.

The heaviest motorcycle in the world crown goes to Tilo Niebel, his brother Ulf and father Wilfred in Zilly, East Germany. The family built the road-going monster in their Harz Bike Forge, a vast garage and museum, which looks like a cross between Santa’s Grotto and Mad Max’s workshop.

What’s the big deal I here you say? All you have to do is undo two bolts, and the seat comes right off, ready to swap, right.  It’s not that kind of seat swap though. This type involves a rider and pillion changing places, on a single motorcycle, while on the move.

In 2001 Finnish bikers Lantinen Jouni and Pitkanen Matti rode along the Paimio to Muuria Highway in the south of Finland on their Honda CBR600 F2. Upon reaching a speed of 140-kph, the pillion climbed over the top of the rider to swap places in 4.18-sec. Their record still stands today.

11. Most People on a Moving Motorcycle

India has the most traffic-congested cities in the world, but the ACS Tornadoes Motorcycle Team, have ride-sharing down to a fine art.

On November 19th, 2017, in Karnataka’s southwest Indian state, the team managed to get 58 men on a 500cc Royal Enfield motorcycle, which carried them for 100-m. And who said Royal Enfield’s have soggy suspension?

The pyramid was maintained for 240-m, breaking their own record with twice the distance and with 50 more men. The team rides Royal Enfield Bullets, and this was their fifth world record.

13. Longest Motorcycle in the World

Measuring a colossal 26.29-m (86.3-ft), the world’s longest motorcycle was built by fabricator and eccentric inventor Bharat Sinh Parmar.  Parmar rode his converted Bajaj Pulsar motorcycle for 100-m without having to dab a foot down.

The bike was converted from chain to shaft drive, which ran the entire length of the bike. Not content with building the bike’s 24-m triangular section steel frame, Parmar also fabricated a 12-m long shovel, rake, and pair of crutches.

14. Highest Mileage on a Motorcycle

On handing the keys over to his beloved Suzanna, Harley-Davidson presented Dave with a new Road Glide in recognition of his brand loyalty and commitment to biker’s rights.

Suzanna now sits in the Sturgis Motorcycle Museum and Hall of Fame. Despite losing a leg in a 2011 motorcycle accident, Dave Zien continues to ride. He has clocked up a career total of over two million miles. He holds an impressive 119 distance-related records.

Death and taxes may be the only two certainties in life, but when it’s time for the big sleep, I want Pastor Paul Sinclair to take me to my final resting place.

The go-faster pastor clocked up a record breaking 203.74-kph in 2013 on his Hayabusa powered hearse sidecar outfit. And yes, he genuinely uses the outfit for real funerals. 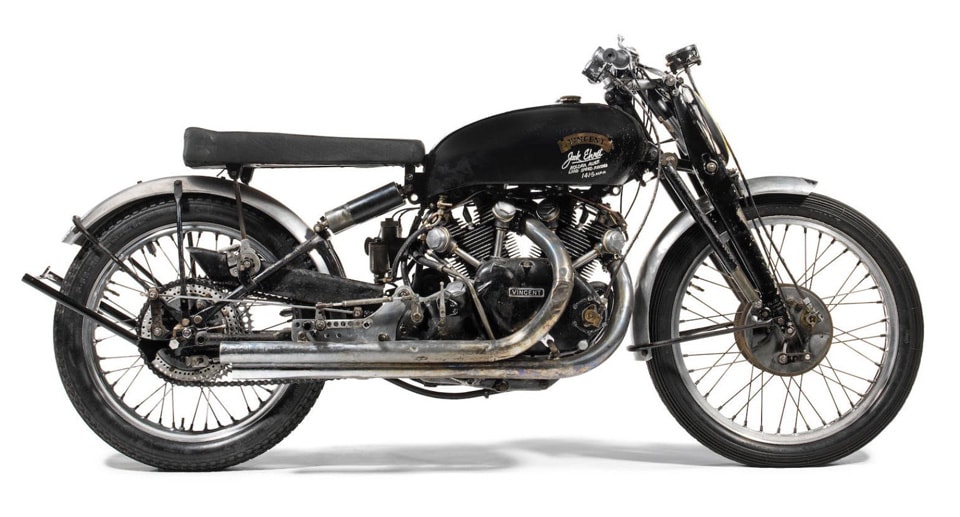 This has to be one of the most frustrating categories to list, as no two answers are the same. The Guinness Book of Records cites the MTT Turbine Superbike costing $185,000 as the leader. The Superbike, though, is now surpassed by its successor, the MTT 420RR. The 420RR has an even more powerful Rolls-Royce helicopter jet engine and costs approximately $250,000.

The two previously mentioned bikes are technically production motorcycles. If we want to include auctioned motorcycles, the goalposts change once again.

The 2014 auction of the Captain America Panhead chop built for the 1969 movie ‘Easy Rider’ reached a staggering 1.35 million dollars. The bike’s authenticity has been questioned, though, so the actual winner is a 1951 Vincent Black Lightning that reached $929,000 in January 2018.

With Ewan McGregor and Charley Boorman recently completing the ‘Long Way Up’ riding Harley-Davidson Livewires, electric bikes return to the spotlight. They may have traveled the furthest (13,000-mi), but they are sure not the fastest.

18. Longest Time Balancing a Motorcycle on Your Head

When it comes to breaking motorcycle records, balancing one on your head isn’t the first thing that comes to mind, unless, of course, your name happens to be Gerard Jessie. The daredevil strong man from the Philippines balanced a Honda step-thru motorcycle on his head for 14.93-sec.

Mr. Gerard also claimed the record for the number of candles blown out with a single fart (5). However, surprisingly the Guinness Book of Records did not have a relevant classification!

Everyone at some time suffers from numb-bum during a long motorcycle ride, but that isn’t a problem for former bike racer turned stunt man Marco George.

Marco holds the record for achieving the world’s fastest handstand on a motorcycle, clocking up an amazing 122-kph (76-mph) while balancing upside down on the gas tank.

Catching a lift into town to buy a new one, Marco had only two practice runs to get used to his new lid before going for the world record.

Whether it’s the rush of adrenalin or the bragging rights to say you’re the best in the world, being highest, fastest or just the plain craziest is addictive. One thing is for sure though, no matter how hard you push the envelope, someone somewhere will one day push it that little bit further.

Known as wheelie bins in the UK, design engineer Andy Jenkins fitted a small four-stroke Honda motorcycle engine into a garbage bin and hit the track. On September 27th at the Elvington Airfield in York, Great Britain, and despite crosswinds that almost blew his bin over, Andy posted a new world record at 69.76-kph.

The post 20 Motorcycle Records of All Time: On A Wing and a Prayer appeared first on Old News Club. 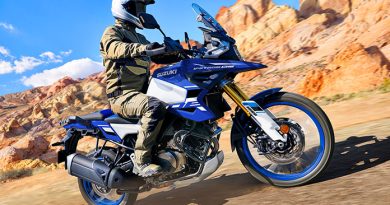 2022 Motorcycle of the Year 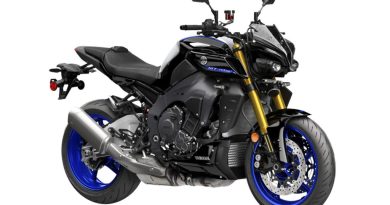